When World Dairy Expo got its start in 1967, no one knew for certain just how big of an event it would become.

Dairy cattle shows were among the many activities at the first World Dairy Expo. That year, 1,182 head passed through the ring. The show was deemed a success, but it didn’t automatically become the national show of all the breeds.

“When Expo started, it wasn’t necessarily billed as the ‘greatest show on earth,’” noted Roger Neitzel, long-time staff member of the Brown Swiss Association, explaining why there may have been some initial hesitation for breeds to move their national shows to Madison. As for the Brown Swiss breed, though, “The board of directors was ready to support it.” 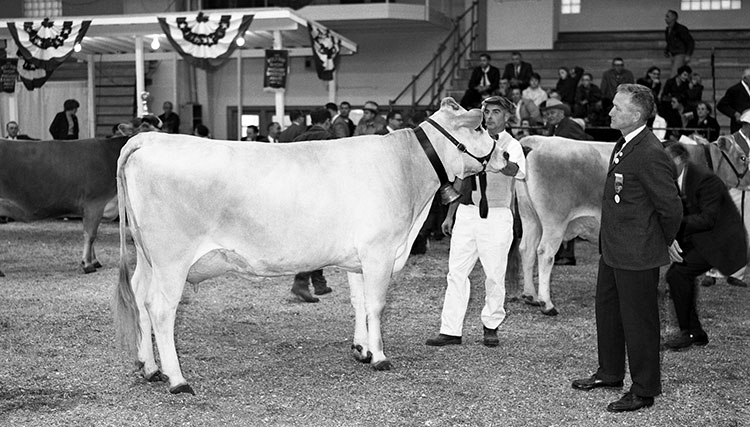 The Brown Swiss breed was the first to hold its national show at World Dairy Expo back in 1968. Bridge View R.F. Joanne was the first-placed 2-year-old and was later named Grand Champion of that show by judge C.L. Norton. Orville Kurtz, Milton, Wis., is at the halter.

The Brown Swiss breed was the first to drop its anchor in 1968 and hold a national show in Madison, Wis., at World Dairy Expo. For about 20 years prior to that, the National Brown Swiss Show had been held in conjunction with the Dairy Cattle Congress in Waterloo, Iowa. Then, in 1966, it moved to the Tulsa State Fair in Oklahoma. The following year it was held during the North American Dairy Show in Columbus, Ohio.

As documented in the Brown Swiss Bulletin, upon receiving invitations, listening to presentations, and after a long period of serious deliberations, in late 1967 the Brown Swiss Association’s board of directors voted to hold the 1968 National Brown Swiss Show at World Dairy Expo. Other breeds soon followed, but the Brown Swiss breed was the first to use Expo as a home for its national competition.

In all, 83 exhibitors from 13 states brought a total of 268 head (44 bulls, 90 heifers, and 134 cows) to that first national show at World Dairy Expo. The cattle were judged by Charles L. Norton of Kansas State University in Manhattan, Kan. The 3-year-old class was the largest of the show, with 37 head. The 1968 Brown Swiss show was the third largest national contest up to that point, exceeded only by the 302 head shown the year before in Columbus and the 270 head exhibited in Waterloo in 1953.

The Grand Champion Female from the first national show at World Dairy Expo was Bridge View R.F. Joanne 494351, the only entry from California. Her owner, Pete Vanderham, was not able to make the trip to Madison that year, so he sent the 2-year-old to Wisconsin by train with a show string of Milking Shorthorns. Vanderham’s good friend, Orville Kurtz, was the one who took the halter and led Joanne to her first-place finish.

Typically unheard of, a bull calf rose to the top over all the other bulls and was named Grand Champion. The calf, Criblez Swinging Medallion, was owned by Tom and Maurice Criblez of Bluffton, Ohio. The Premier Sire was a Wisconsin bull, Welcome In Moonlight, bred jointly by Voegeli Farm Inc. and Nathan Bear of Sugar Valley Farm. Voegeli Farm was also named Premier Breeder, while another Wisconsin herd, Red Brae Farm, was the Premier Exhibitor.

The show was indeed a grand celebration. Ribbons were presented by “Alice in Swissland” Ruth Ellen West and “Alice in Dairyland” Bobby Thoreson. The traditional Parade of Champions was held following the aged-cow class on the second day of showing. The Alpine Duo of Robbie Schneider and Roger Bright from New Glarus, Wis., led the way with yodeling, accordion music, and flag throwing. First- and second-placed animals from each cow class and the Junior and Reserve Junior Champions were paraded around the ring one more time with an imported Swiss bell hanging from each one’s neck.

The National Brown Swiss Show’s stay in Madison was short lived, however. Even though the quality of the show was reported to be outstanding from top to bottom in each class, the Brown Swiss Association’s board of directors voted to move the 1969 national show back to the North American Dairy Show in Columbus, Ohio. The show was held there again in 1970.

“The board likely wanted to please everyone and keep moving the show around,” Neitzel said, explaining that there were many Brown Swiss herds in New York, Pennsylvania, Indiana, and Ohio at that time. Still, there were a lot of Brown Swiss breeders in Iowa, Minnesota, and Wisconsin, too, and soon talk began to hold a series of regional national shows.

It was decided in November of 1970 to have three regional national shows. The Central National Show was to be held in conjunction with World Dairy Expo in Madison; the Eastern National would take place during the North American Dairy Show in Columbus; and the Western National would occur at a location yet to be determined. It was decided that one judge would serve as the official at all three shows. The following year, exhibitors at each of the regional shows would select their own judge for the next year.

The format of three regional national shows continues today. Neitzel explained that the Eastern National relocated after a few years and is now held during the All-American in Harrisburg, Pa. The Western National continues to move around to various locations. Since 1971, however, the Central National has always been held in Madison.

The best of the best

“World Dairy Expo draws in the best of the best, not just for Brown Swiss, but for all breeds,” he said.

Neitzel was in graduate school at the University of Wisconsin-Madison when World Dairy Expo began. His first job at Expo was to walk the lines of cattle at night. The next year, he hauled and delivered feed to World Dairy Expo for Germantown Feed Company. After that, he moved on to an office position taking feed orders.

After a stint with Michigan State University’s Dairy Science Department, Neitzel moved back to Wisconsin in 1979 to take a job with the Brown Swiss Association as superintendent of records, a position he held for 32 years. He hasn’t missed an Expo since.

Neitzel can recall a lot of changes in the Brown Swiss breed from the late 1970s to now, including more dairyness and quality of udders. He noted that all characteristics of the cow have improved over the years, especially type.