The incredible milk price year that was 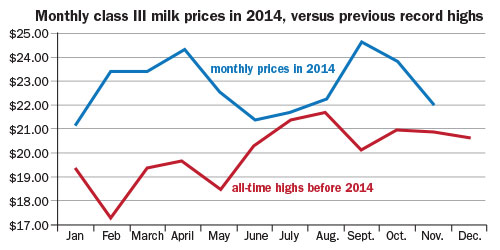 In milk price terms, almost every day was Christmas for dairy producers in 2014.

When it is announced in a few days, the December Class III price of around $17.75 will be a disappointing end to an incredible year. It wasn't just one for the record books; it happened on a scale that had never been seen before.

At that guesstimated $17.75, Class III would close out the year averaging $22.37 per hundredweight – which would be exactly $4 more than the previous record in 2011.

Even if December came in at just $10, the yearlong average would still be more than Class III had ever been for a single month prior to 2014.

All 11 monthly prices thus far in 2014 have been the highest in history for those months.

There's no chance of a new record in 2015, but recent history suggests producers won't have to wait long.

The message is that while record 2014 milk prices are over, even bigger ones are probably not far away.