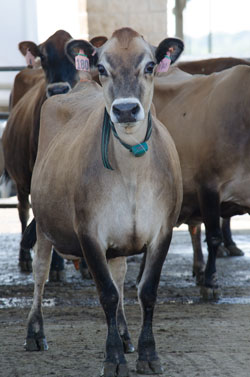 The information provided on DHIA culling in last week's Hoard's Dairyman Intel article, "Low production tops the culling list," actually comes from a report released by the Council on Dairy Cattle Breeding. The full report can be found here. The 2014 report is scheduled to be released later in the spring of 2015.

The total number of herds included in the report was 40,335. This encompassed herds with cows that completed lactations regardless of termination code (including those that stayed in the herd). The percentages of cows reported in the article that had lactations that ended normally (63.7 percent), with abortion (0.3 percent) or were sold for dairy purposes (3.4 percent) were based on those 40,335 herds.

The other percentages reported were based on cows that left the herd except for dairy purposes (31,119 herds). Among those cows, the highest percentage left the herd for "unspecified" reasons for all breeds (28.0 to 34.8 percent). After that, the biggest reason was low production for Holsteins (20.2 percent) and Jerseys (22.3 percent), reproduction for Ayrshires (22.9 percent), Brown Swiss (21.9 percent), Milking Shorthorns (20.6 percent), and Red and Whites (24.0 percent), and death for Guernseys (22.2 percent).