Maximizing comfort and minimizing stress are the goals to keep top of mind when designing a transition cow facility.

By Gordon A. Jones, D.V.M. And   David Kammel, UW-Madison
The authors are a veterinarian who helped design Fair Oaks Dairy and Central Sands, and a professor of biological systems engineering at the University of Wisconsin-Madison.

We are recognizing that transition cow care can have significant impacts on health and performance during the subsequent lactation. In order to remedy the issue, producers and their advisers should consider three circles of excellence. The first circle is the 24-hour period commonly referred to as the cow's daily time budget. That budget focuses on maximizing lying time, enhancing dry matter intake earlier, and minimizing time forced away from the pen. 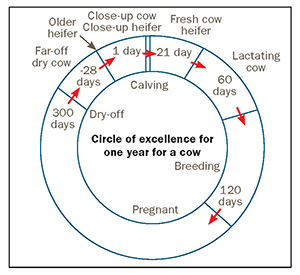 The second circle is the life cycle from birth to when a heifer enters the milking herd. The third circle of excellence is the annual cycle starting from a cow's dry period or a heifer's introduction into the herd (Figure at right). That circle follows them through the calving process, breeding, lactation and finally drying off to repeat the cycle.

To fully optimize this time in a cow's life, we will focus the discussion on the transition cow facility design for the two- to three-week period before calving, the calving process and the two to three weeks after calving. This transition period is the time in the cow's or heifer's life that presents the greatest risk of developing a health problem. In order to begin, you will need to determine the management plan near calving.

Just-in-time calving. Large confinement herds often milk around the clock, with employees moving cows night and day. This allows almost continuous or hourly observation of the close-up pen to identify actively calving cows or "just-in-time" calving management. When observed, the individual cow or heifer is moved from the close-up group pen to the calving pen to complete the calving process in a clean, dry, well-bedded environment.

Socially stable group calving. For smaller herds that lack around-the-clock monitoring, the building design should account for the likelihood that there is infrequent monitoring (more than four hours) of the close-up cows or heifers. In this case, close-up cows or heifers should be housed in a well-bedded group pen to reduce the risk that the cow or heifer will calve in a freestall pen.

This system is called socially stable group calving. A common system uses three pens with seven days of capacity, 21 to 15 days, 14 to eight days, and seven to zero days with Day 0 being the projected calving day. Cows and heifers are moved into the pens weekly with no new animals added to the pen. Groups are moved into the next closest calving pen weekly. All three pens could be bedded group pens, or the first two pens furthest from the calving date could be freestall pens, and the last pen could be a bedded pack.

In the last pen, the cows leave after calving, but no other new cows are introduced into that pen during the week. Cows observed to be actively calving can be moved into an individual calving pen. This system ensures that, if a cow calves earlier than expected, she would still calve in a clean, well-bedded group pen. When pens are empty, they can be cleaned before the next group is moved into the pen.

For a large herd, the number of cows in a specific group may be large enough to justify an additional pen. For example, it may be practical to separate heifers from cows during their close-up transition period and subsequent lactation. Separation minimizes social stress that occurs when younger or submissive cows enter a pen.

On the other hand, in smaller herds, the number of cows in a specific group may not reach a critical threshold, so it may be necessary to consolidate groups. For example, in a medium-sized herd, the springing heifers and far-off dry cows might be commingled into a pen, or the close-up cows and heifers might be combined into a pen to create a practical pen size.

Determine animal numbers. The number of cows in a transition cow group depends on herd size, calving interval, reproductive efficiency, culling rate and the time period of group housing. To help determine the number of animals in each group pen, review weekly or monthly reports of cows calving, heifers calving and total calvings from herd management records during a 12- to 24-month period. 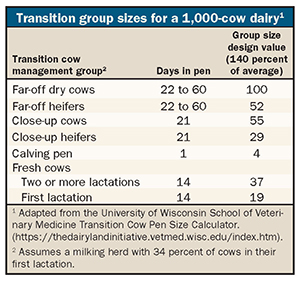 The time period within a pen for a group is based on recommended practices and experience and should be documented as you work through a transition cow management plan. The number of days' capacity for each group such as far-off dry cows, springing heifers, close-up cows or heifers, calving pen and fresh cows are used to determine the group or pen size. Common recommendations vary from seven to 28 days for the close-up cows or heifers and fresh cow groups (see table at right).

Design the pen for more than the average need. The most common mistake in transition cow facility design is not having adequate space to properly manage and care for the cows during the transition period. Far too often due to inadequate pen space, some cows are forced to move out of a pen too early to accommodate the new cows that need to enter the pen, or the pens are overcrowded with inadequate space for cows to eat or rest.

Overcrowding may be the greatest concern for the submissive cows in a large group because those low-ranking social order individuals may not be able to compete for feed at the bunk or able to lie down because the resting space is full. This creates a situation where cow comfort and cow care falls short. This can cascade into a host of metabolic and health-related problems that could be minimized with adequate space in the facility design.

Several sources recommend that the transition cow group pens be sized to meet the pen space needs for 90 percent of the year. For example, using herd data of weekly calvings, the 90th percentile of calvings would be used as the minimum group or pen design capacity. Pen capacity designed for the 90th percentile will meet needs 47 of 52 weeks. For the other five weeks (10 percent), the pen can be managed by adjusting the time period that the cows are in the pen.

For example, cows that are doing well could be removed in preference for the cows coming into the pen to avoid overcrowding. This maintains the priority of having adequate feed and resting space rather than overstocking the pen and affecting the entire group.

Find the super-shedders in your barn
By Gordon A. Jones, D.V.M. 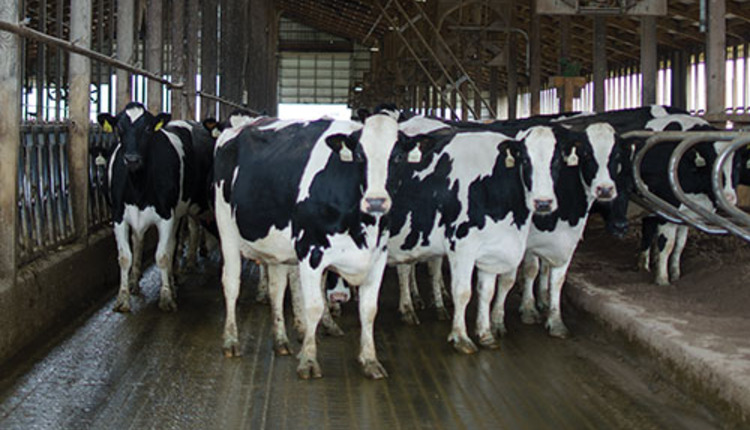 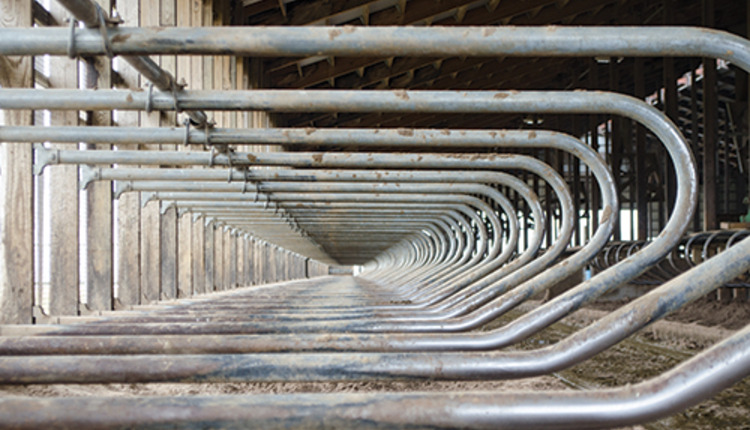