By Chad Dechow
The author is an associate professor of dairy cattle genetics at Penn State University.
Determining the breed composition of the U.S. dairy herd is somewhat of an inexact science because not all herds are enrolled in an official testing plan. Even among cows enrolled in a testing plan, the accuracy and completeness of parentage records vary among herds. Nevertheless, it is possible to make reasonable approximations of our nation's herd using DHI (Dairy Herd Information) summaries and semen sales statistics.

Two standards of measure
Statistics for cows that are enrolled in a DHI testing plan are summarized by the CDCB (Council on Dairy Cattle Breeding). I've shown the percentage of cows listed as Holstein, Jersey, crossbred, and others that completed lactations in 2007 to 2008 and 2014 in the accompanying table. The 2007 to 2008 time frame was the most historic data currently available and was calculated bi-annually, whereas 2014 was the most recent data and is calculated on an annual basis. 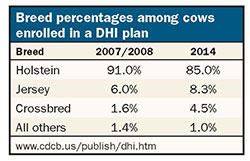 As you can see, the proportion of U.S. cows coded as Holstein declined by 6 percent during this time period, while Jersey (+2.3 percent) and crossbreds (+2.9 percent) both grew in proportion.

A second method of determining our national dairy herd is to evaluate semen sales statistics that are reported by NAAB (National Association of Animal Breeders) and others. The percentage of semen sales from Holstein, Jersey, selected foreign breeds, and all others is shown in the accompanying figure for a three-decade period. The selected foreign breeds include Swedish Red, Norwegian Red, and Montbeliarde and include semen sales reported by NAAB in addition to company data from non-NAAB sources.

Please note that the percentage of Holstein is presented on the right-hand axis, whereas all other breeds are on the left-hand axis. This is done so that we can see trends more clearly, but we have to be cautious because it does exaggerate the visual effect of the trends.

Nearly all of the imported foreign breed semen is intended for crossbreeding. The proportion of semen from other breeds that is used to generate crossbreds is unknown, which adds a little uncertainty to our breed composition estimates. This data is also limited in that fertility differences among breeds may shift the proportion of live offspring, but it does not account for cows from herd bulls, and some imported semen may be missed.

While our numbers are not precise, the results in our table and chart paint a similar picture. The proportion of the U.S. herd that is Holstein has declined from approximately 90 percent to 85 percent over the last decade . . . with the influence of Jersey and foreign breeds intended for crossbreeding both growing.

A rise in the number of crossbreds is also apparent in CDCB statistics that are generated during routine genetic evaluations. The first year where the number of first lactation crossbreds exceeded 100,000 took place last year and has nearly doubled in the last five years. That includes first-generation crosses as well as later-generation crosses. Once again, only cows enrolled in a testing program and with pedigree information are represented in that number, but it does help to demonstrate that we are seeing a shift in breed composition.

The current era is, of course, not the first time we have seen shifts in the composition of our national herd. In 1935, a census of agriculture indicated that Jersey was the most common dairy cattle breed with 42 percent, followed by Holstein (40 percent) and Guernsey (16 percent). By 1970, Holsteins had climbed to 84 percent of the population and the number of Guernseys and Jerseys were very similar with both representing about 6 percent of the cows in our national genetic evaluations.

Not all bad news for Holstein
While the growth in the proportion of Jerseys and crossbreds has come at the expense of Holstein, there's actually some good news for Holstein enthusiasts. The number of Holsteins registered by the Holstein Association USA Inc., is growing. Holsteins may represent a smaller percentage of our national herd than they did a decade ago, but the base of cows and bulls that drive genetic improvement has expanded to some degree. The number of registered plus grade Holsteins enrolled in a testing program has also risen. There were 868,667 Holsteins born in 2011 that contributed to national genetic evaluations, which was a 40 percent increase from cows born in 2001. 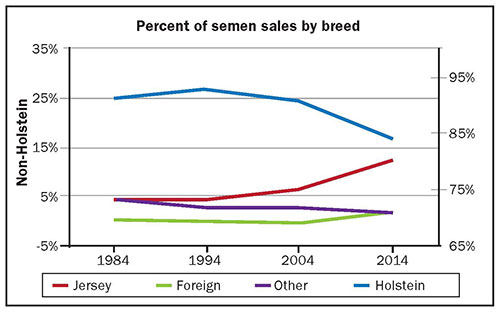 For most of my lifetime, Holsteins have represented 90 percent or more of our nation's dairy population. That is no longer true, though I expect Holsteins to remain our predominate breed into the foreseeable future. The large population of Holsteins provides opportunities for the breed to meet market demands, such as polled genetics, more readily than others.

Nevertheless, markets that increasingly favor high milk solids, lower fertility levels for Holsteins, and cows viewed by some as too tall in stature present a strong challenge to Holstein breeders if they aim to maintain such a large proportion of the national herd.

Reproduction E-Source
What can we do about inbreeding?