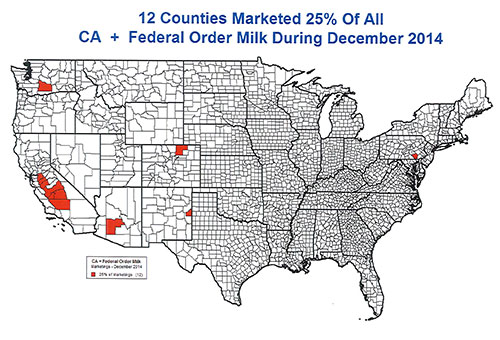 Just how much has our industry consolidated?

It took only 12 counties to produce 25 percent of our nation's milk last December.

By casting a slightly wider net, 56 counties were responsible for producing half of the U.S. milk needs, according to research conducted by the Central Federal Milk Marketing Order administrators.

An expanded list of 180 counties produced 75 percent of the nation's milk.

The county data mirrors state and national milk production. The top two dairy states - California and Wisconsin - account for 34 percent of the nation's milk flow. When adding the next three states - Idaho, New York and Pennsylvania - the percentage climbs to 53 percent.

If you follow this link, you can review the entire slide deck from the Central Federal Milk Marketing Order.