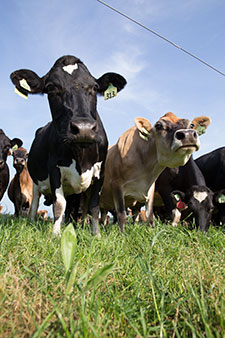 The milk per cow totals are factually correct in USDA's July and August milk production report. For the first time in over five decades, the average Wisconsin cow produced more milk than one in California. The totals were 1,995 versus 1,915 pounds per cow for July and 1,940 versus 1,875 for August. That means the average Wisconsin cow produced 66.5 and 62.5 pounds of milk, respectively, each day compared to 63.8 and 60.5 in the Golden State.

That's only part of the story, though, as one needs to factor in the "browning" of California. And dairy experts in that state aren't referring to the drought when talking about browning.

While Wisconsin has long been a leader in breed diversity of its dairy herd, the California herd has been changing, too. So much so that there is a higher proportion of colored breed cows in California than in Wisconsin these days.

California had 1.78 million cows in July, according to USDA. Of that total, some 14 to 16 percent are likely Jerseys. That means there could be nearly 300,000 Jersey cows contributing to a 63.8-pound daily average in California. This 14 to 16 percent ratio does not factor in Holstein-Jersey crosses that may account for 3 to 5 percent more of the bovine population. These are intuitive estimates based on breed association and DHIA records.

This dramatic shift in breed ratios could be dubbed the Hilmar effect. Of course, Hilmar is the California-based cheese plant that was started decades ago by 12 Jersey breeders and has since grown into the largest single-site cheese plant in the world. Why does breed matter?

While Jerseys produce less milk than the Holstein, the solids content is higher. That means, pound for pound, Jersey milk makes more cheese. And given that more milk gets turned into cheese than any other dairy product, perhaps the new measure for USDA should be pounds of combined fat and protein, not milk production.

As stated earlier, Wisconsin had been a leader in a number of colored breeds. The Badger State is home to the most Guernseys and Brown Swiss in the nation. However, those two breeds along with its Jersey population just don't have the collective breed market share that Jerseys do in California.

While USDA production data is accurate . . . the Wisconsin cow is now more productive on a milk-pounds basis than her cousins in California . . . we mark that data with a big asterisk because it must be an apples-to-apples comparison and breed does distort the comparison.