At birth, the majority of calves will only absorb 30 to 35 percent of the immunoglobulins they consume. Clean colostrum helps ensure antibodies get to the gut before bacteria has a chance to shut absorption down. 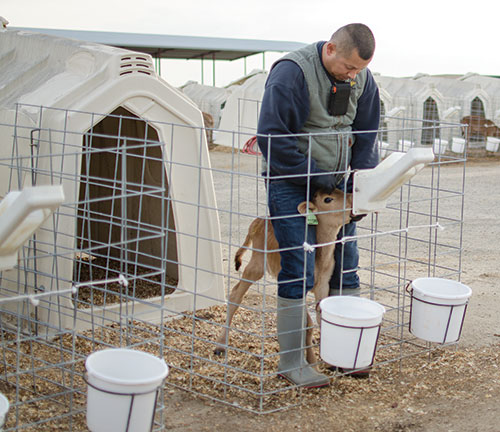 Calves are not born with antibodies in their blood, and they cannot produce them efficiently in the first month after birth. As a result, they must receive antibodies from colostrum. Proper colostrum handling ensures calves receive enough antibodies to protect them from disease in the first weeks of life so they can grow and effectively defend themselves from later illnesses.

Antibodies are the scouts of the immune system. They recognize specific pathogens and signal the body to destroy disease-causing organisms before they produce illness. There are several classes of antibodies, but the one most prevalent in bovine colostrum is immunoglobulin G (IgG). Calves do not have antibodies in their blood at birth because they are too large to move from the cow's bloodstream and across the placenta.

This puts calves at a disadvantage against disease-causing organisms because they cannot easily recognize and eliminate invaders. To make matters worse, the immune system is generally less effective in calves less than 4 to 5 weeks of age. This is why, on many farms, the highest rates of sickness and death often occur in calves under 4 weeks of age. 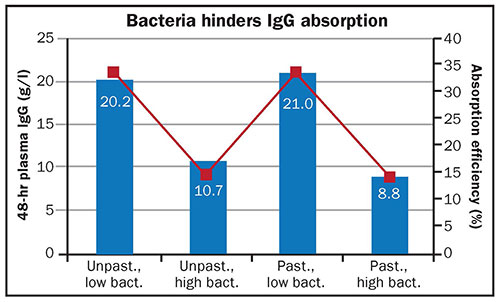 There are four important control points for ensuring calves receive adequate IgG: quality, quantity, timing and cleanliness. Each control point can be managed to maximize IgG absorption. Providing 4 quarts or more of colostrum with an IgG concentration of 50 g/L or greater covers the first two steps, allowing the calf to absorb as much IgG as possible.

Calves absorb IgG most efficiently within 4 hours of birth, and the gut becomes less permeable to IgG as time passes. Thus, the sooner after birth that calves are fed, the better. However, even at birth, when absorption efficiency is highest, the majority of calves will only absorb about 30 to 35 percent of the IgG. This is why it is important to avoid practices that reduce calves' absorptive capacity.

Bacteria cuts absorption in half

Our study, published in the Journal of Dairy Science, studied 104 bull calves to compare IgG absorption among calves fed four different colostrum treatments. Colostrum from individual cows was mixed together to make one large batch. All of the treatments were created from the same batch so all calves received the same amount of IgG. Half of the colostrum was pasteurized at 140°F for 30 minutes and half was left unpasteurized. Then each batch was split in half again, with one-half stored at room temperature for a period of time while the other half was frozen immediately. Pasteurized colostrum that was held at room temperature was inoculated with a small amount of the unpasteurized colostrum to establish some of the same bacteria.

It appeared that high bacteria counts reduced the efficiency of absorption of IgG by about half compared to colostrum with low bacteria. In another recent study, researchers from the University of Minnesota compared IgG absorption in calves fed colostrum with different concentrations of IgG and bacteria, and also found that calves absorbed less IgG as the concentration of coliform bacteria in colostrum rose.

Bacteria can limit IgG absorption by interacting with the cells of the intestine. During the first 24 hours after birth, the intestinal cells can absorb bacteria as well as IgG, and there is evidence that, once absorption of either bacteria or IgG begins, the ability to continue to absorb any large molecules starts to decline. This poses a twofold problem. Not only is IgG absorption reduced, but absorption of bacteria also exposes the calf to potential systemic infection when their immune system is the weakest.

The important point from this research that we must understand is that any bacteria the calf consumes can affect the ability to absorb IgG. Therefore, it is important to make sure calves are born in a clean environment. Regardless of the bedding material, ensuring that it is clean will not only benefit the newborn but may also reduce potential incidence of mastitis and metritis in fresh cows. In addition, it is important to feed clean colostrum to calves. Colostrum may become contaminated during collection and feeding or bacteria may grow during storage.

Collect colostrum into clean containers, and feed it to the calf as soon as possible. If the colostrum will be stored, cool it to 38°F or less within an hour after collection. Because more time is required for the temperature to lower in large volumes of colostrum, store colostrum in clean bottles or other small containers (not 5-gallon buckets) to help it cool more quickly.

Pasteurizing colostrum is another strategy that can enhance IgG absorption by reducing the number of live bacteria that reach the gut. Pasteurize colostrum using settings specific for colostrum. If colostrum is heated above 140°F, the IgG begins to lose its function and has less or no benefit to the calf.

Finally, remember that pasteurization of colostrum will reduce bacteria, but it does not eliminate all bacteria. As shown in the results from our study, growth of bacteria postpasteurization can eliminate any benefits gained by pasteurizing and will reduce IgG absorption if levels are high enough.
1511_718
Related