The presence of inflammation helps a cow heal after delivery, but other problems arise if it lingers too long.

By Kirby Krogstad and Barry Bradford

The authors are a Ph.D. student and a professor at Michigan State University, respectively. 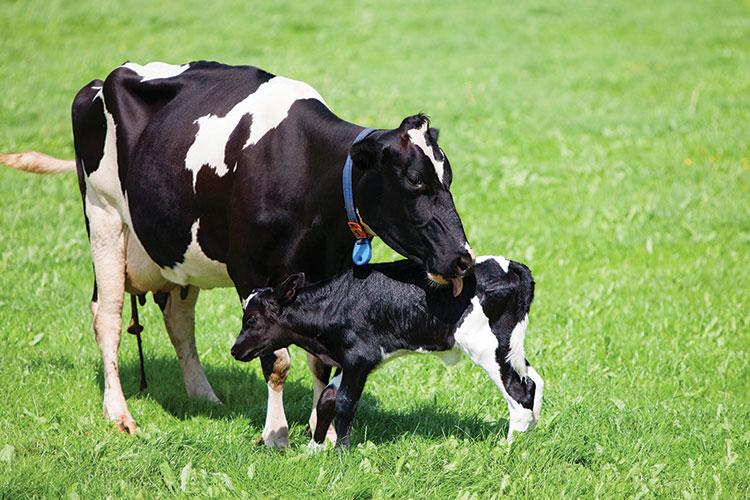 Inflammation after calving aids in a cow’s recovery, but sustained inflammation can suppress appetite, cause tissue damage, and reduce milk production.

After being vaccinated, have you ever felt feverish and tired? Have you sprained your ankle and experienced swelling, or was your ankle even warm to the touch?

If you’ve had these experiences, you know firsthand how inflammation can dramatically change how your body functions. These times are not enjoyable, and it’s not surprising that the term “inflammation” has negative connotations in the minds of most people. However, inflammation is a process that helps our bodies survive challenges and return to a normal state as soon as possible.

In the case of a vaccine, inflammation helps trigger the mechanisms that build defenses against a pathogen that you may come in contact with again. With a sprained ankle, inflammation is part of the response that helps remove damaged cells, deliver the building blocks for tissue repair, and stimulate the growth of new cells.

The dairy cow is no different — its body uses inflammation to help battle infections and recover from injury. In fact, there is growing evidence that inflammation is also critical to tissue development, including mammary development during pregnancy. Inflammation should, therefore, be considered a normal component of animal biology and only problematic if it becomes dysregulated or excessive.

Before and after calving

Transition dairy cows are impacted by several processes that help to drive an inflammatory response. First, we now understand that inflammation in the cervix and uterus is essential to allow for a normal birthing process; it helps loosen connective tissue to open the birthing canal and drives uterine contractions that expel the calf and placenta.

Secondly, the physical trauma of calving triggers an inflammatory response to help heal and rebuild tissue, as well as to clear out pathogens invading the susceptible uterus. Finally, common infections in fresh cows, like mastitis and metritis, can further promote whole-body inflammation.

Inflammation after calving aids the cow’s recovery from the calving process, but if the inflammation is not resolved in a matter of days, there may be greater risk of low production and health problems. Sustained or uncontrolled inflammation is problematic for several reasons: It can suppress appetite, cause collateral tissue damage, and directly suppress milk production.

Unfortunately, suppressing this inflammatory process can sometimes backfire. For example, researchers in Canada found that giving the nonsteroidal anti-inflammatory drug (NSAID) Banamine prior to calving elevated stillbirth rates, and even if they waited until shortly after calving to treat, the treatment raised the risk of a retained placenta and reduced milk yield. Some NSAIDs interfere with inflammation that is necessary for the calving process, although others appear not to.

Later may be better

Despite this cautionary tale, NSAID treatments that are initiated after the placenta is cleared have shown more positive responses. An experiment in Kansas showed that multiparous cows given either of two NSAIDs starting 12 to 36 hours after calving produced roughly 1,600 pounds more milk over the lactation compared to control cows.

On a Colorado dairy, administration of aspirin postpartum raised milk yield by 3.9 pounds per day (9.9 pounds per day if the cows experienced dystocia), reduced somatic cell count (SCC) by 33%, and reduced days open by 23 days. A similar study from Pennsylvania observed a 3.5 pounds per day increase in milk yield for multiparous cows supplemented with aspirin, along with evidence of reduced metritis incidence.

Currently, it appears that administration of NSAIDs — including aspirin, sodium salicylate, or meloxicam — within 24 hours of calving can positively impact subsequent milk production in multiparous cows. Data on improvements in health are less clear, and research should seek to address these remaining questions. Furthermore, not all studies have shown milk production responses, and ongoing research is exploring whether differences in postcalving inflammation across herds may explain variable impacts of NSAID treatment.

Add it to the feedbunk

It is important to note that no NSAIDs have FDA approval for combating calving-related inflammation, and it is essential to work with your veterinarian if you want to explore these strategies on your farm. However, there are nutritional interventions that can also provide anti-inflammatory benefits.

Polyphenols are plant compounds that often have anti-inflammatory properties. We recently reported that an extract of the Chinese skullcap plant, containing abundant polyphenols, increased milk yield by 3,100 pounds over the entire lactation when supplemented to cows in the first 60 days of lactation. We also observed a reduction in SCC and incidence of mastitis as a result of the treatment.

There are thousands of polyphenolic compounds, some of which have had similar positive impacts on health and productivity in dairy cows. However, many products are unproven, so it’s wise to ask a lot of questions about evidence of impacts before investing in such additives.

Sources of omega-3 fats can also provide anti-inflammatory benefits, with a growing body of evidence showing positive effects for transition dairy cows. In a recent study, Israeli investigators fed 516 cows a control diet or a diet with an extruded flax seed supplement (source of omega-3) throughout the transition period. Researchers observed a 20% reduction in SCC and a reduction in mortality with the supplementation of the flax product. The supplement also boosted BCS post-calving and improved fertility. One drawback of omega-3 supplementation was an 11% reduction in milkfat yield.

Algae supplements, another source of omega-3s, have also shown promise in improving fertility of dairy cows. In a study published in 2017, 739 cows on a farm in California were assigned to control or algae supplementation groups. The omega-3 enriched algae increased conception rate from 31% to 42% and reduced days open by 22 days. Milk yield improved by 2 pounds per day, although fat yield was again slightly reduced (0.09 pound per day). It is worth noting that these supplements also elevated the omega-3 content of milk somewhat, which is a positive for health-conscious consumers.

In the last decade, our understanding of transition cow interventions to improve health, production, and fertility has evolved. Controlling inflammation through NSAID administration has been successful in expanding milk production, but regulatory hurdles stand in the way of widespread use of these strategies.

Fortunately, we have dietary options with promising results in controlled studies. Polyphenolic compounds and omega-3 supplements have had positive effects on not only milk production, but also on health and fertility. If you are concerned that the transition period is holding your cows back, it may be worth exploring dietary supplements as nutritional avenues to keep postpartum inflammation in check without disrupting its necessary roles.

With healthy, productive, and fertile cows in the barn, maybe you’ll finally have a chance to give that ankle a rest!

Pick an effective inoculant for your silage
Crops and Forages
Related to:
features, calves, calf care
In Dairy Calf & Heifer