The calf chapter of the eighth edition of Nutrient Requirements of Dairy Cattle contains a wealth of information on nutrition and feeding of young calves.

By James Drackley, University of Illinois-Champaign

The author is a professor of animal sciences at University of Illinois Urbana-Champaign. 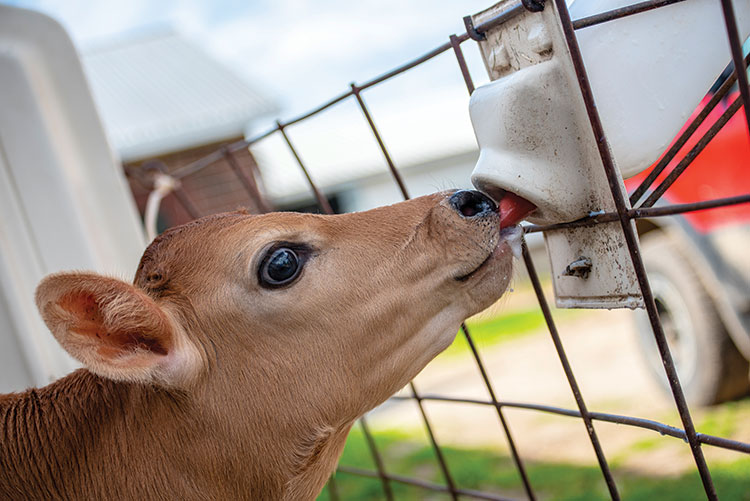 The long awaited publication of the eighth edition of Nutrient Requirements of Dairy Cattle by the National Academies of Science, Engineering, and Medicine (NASEM) includes a chapter on calf nutrition and feeding. The chapter contains updates from the previous edition called NRC 2001, or more formally known as the National Research Council’s 2001 version. In addition to the updates, there are many new features in the definitive guide for feeding dairy cattle as well.

The seventh edition of the publication has served the industry well, but there were inaccuracies in the prediction of calf growth. The model in that edition predicted calf gains that were greater than observed in carefully controlled research studies.

For the eighth edition, we completely redeveloped prediction equations based on recently conducted experiments with both Holstein and Jersey calves. Those studies measured the actual body chemical composition of calves so that we could predict the energy, protein, and fat contents of body weight gain from dietary energy and protein.

A boost for energy needs

Next, we developed an equation relating the energy deposited in body weight gain to the size of the calf and the rate of its body weight gain. This retained or net energy then is converted to a dietary metabolizable energy (ME) requirement.

The figure shows the close agreement between the predicted values and the actual measured values. It also demonstrates that the new NASEM model predicts actual gains better than the previous NRC model, particularly for calves fed both milk and starter. In most practical feeding cases, the new NASEM model predicts about 100 grams less body weight gain than the previous model and is closer to actual body weight gains. 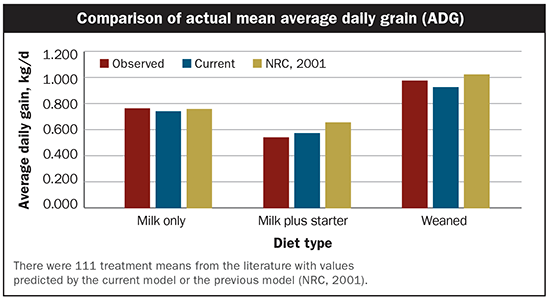 The model is designed to work with feed ME values calculated according to the new equations presented in the chapter. Users should not use older ME values or estimates from third party applications, or the accuracy of the growth predictions will be diminished.

As before, the amount of protein required in a milk replacer climbs with greater growth rates. This is because the requirements for body protein deposition rise faster than the requirements for energy. The model predicts that for calves gaining 2 pounds per day, the milk replacer should contain about 25% crude protein. This is similar to the protein content of cows’ milk on a dry solids basis.

The new nutritional model in the Nutrient Requirements of Dairy Cattle was validated using 416 treatment means from 94 published research studies. These studies represented a mix of older and newer studies, a range of milk feeding rates, calves fed milk or milk replacer only as well as calves fed both milk and starter, and weaned calves. The model does an exceptional job of predicting average performance observed in those studies, without bias due to the relative growth rate.

The calf requirements were designed to be used for newborn calves through to post-weaned calves. Requirements are presented for weaned calves up to 18% of their mature body weight. That level is 275 pounds for a Holstein with a 1,540-pound mature weight or 95 pounds for an 1,166-pound mature Jersey. After this size, the model for growing heifers should be used.

A fresh look at starter

Another new feature is a prediction equation to estimate starter intake. To develop the intake prediction, we used almost 27,000 individual data points from 1,356 calves in 128 research studies around the world. These equations take into account the calf’s body weight, the amount of ME supplied by milk or milk replacer, and the age of the calf relative to when it was first offered starter. Users of the model can choose to have the model estimate starter intake if they do not know the intake of their calves.

A major addition to the new edition is the calculation of mineral requirements using a factorial approach similar to other classes of cattle. Several changes in mineral recommendations resulted.

• Calcium is lower for milk replacer but similar for starter and grower compared with the previous edition.

• Phosphorus is about 15% lower for all feeds.

• Potassium concentration is about 70% greater for milk replacer but similar for starter and grower.

• Copper is about half of the previous values.

• Iron is about 15% lower for milk replacer but similar for starter and grower.

• Manganese is higher for milk replacer but similar for starter and grower.

• Finally, zinc is about 40% greater than the previous edition.

The document contains extensive reviews of the scientific literature. Topics include the amount of milk to feed, starter management, forage provision, weaning considerations, colostrum, water, liquid feeds, automated feeding, and feed additives, among others. The chapter provides an up-to-date summary of state-of-the-art calf nutrition and feeding that should be useful to nutritionists, veterinarians, students, and producers.

Based on the extensive amount of research on growth and behavior of young calves fed larger quantities of milk conducted since publication of the previous edition, the committee recommended that the minimum amount of milk or milk replacer solids that should be fed is 1.5% of birth body weight under thermoneutral conditions. The committee also references the literature showing benefits of feeding more milk than that and encourages users to consider doing so.