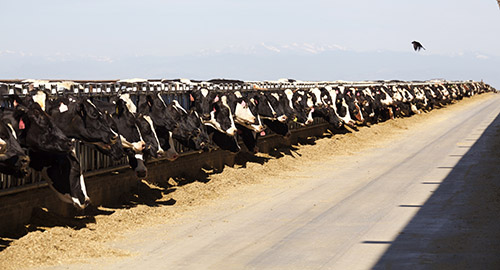 In the Upper Midwest Federal Milk Marketing Order, roughly one-third of the milk came from herds that had 1,000 or more cows. "Roughly" is the key word, as some assumptions must be made when sifting through data generated by Corey Freije in the Upper Midwest's FMMO office in Minneapolis, Minn.

However, no one can dispute the summary statement made by Freije in his recently posted paper, "Analysis of component levels and somatic cell count in individual herd milk at the farm level."

"The smallest producers marketed less than 3 percent of the milk while the largest producers, those shipping over 1.5 million pounds (per month), marketed more than a third of all milk," wrote Freije. To review Frietje's entire paper, click the link.

As for the average in the seven-state region that consisted of Wisconsin, Minnesota, South Dakota, North Dakota, Illinois, Iowa and Michigan's Upper Peninsula . . . "The monthly average pounds of milk marketed was 261,222 pounds; however, 80 percent of the producers had marketings below that average."

While it's true herd sizes continue to grow, the Upper Midwest dairy industry remains quite diversified . . . especially compared to other regions of the U.S.