A safe zone for calving 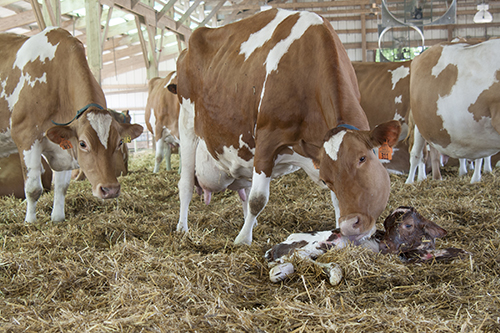 The stress of calving, for both the cow and the calf, can be lessened with a proper maternity pen. There's no one cookie cutter design that all farms must follow, but general recommendations include an area that is quiet, dry, clean and provides some privacy. Done right, it is possible to accomplish these goals in either individual or multiple-animal calving pens.

What type of maternity pen is most common on today's dairy farms? According to data collected by the USDA and reported in the recently released Dairy 2014 "Dairy Cattle Management Practices in the United States, 2014," the largest majority of farms calved at least some cows in a multiple-animal area.

Overall, 58.7 percent of operations that had a designated calving area used multiple animal-calving pens. For farms with more than 500 cows, 77.1 percent used such a calving pen.

Ideally, a maternity pen would be used only for freshening, but on some farms, this pen is utilized for sick or lame cows, too. Almost a quarter of farms (24.9 percent) used this same area for sick cows. A larger group, 36 percent, used it for lame cows.

In all, 40.9 percent of farms used their calving area for sick and/or lame cows. Unfortunately, exposure to sick cows can elevate the potential for disease transmission for both the cow and calf. For this reason, if possible, sick and lame cows should be housed in a different location.