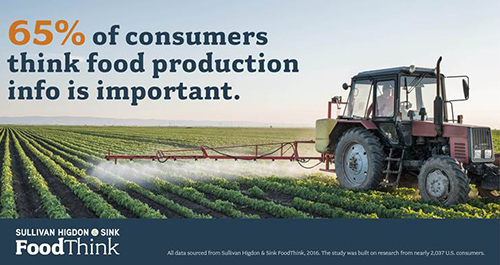 Transparency is certainly a buzzword in agriculture right now. For today's consumer, transparency is the idea of knowing where food comes from and how it's made.

How many of our customers truly care about transparency?

According to new research released by Sullivan Higdon & Sink in their Evolving Trust in the Food Industry report, quite a few. Nearly two-thirds (65 percent) of consumers in the FoodThink research study said it was somewhat or very important to have knowledge of food production process and practices.

The study also found that some consumer segments seem to desire more knowledge than others. Organic shoppers, moms, dads, and those who described themselves as good cooks were more likely to think it's important to understand how food is produced.

Just over one-third (35 percent) of consumers indicated they had good or excellent food production knowledge. That was up from 24 percent in 2014. Almost half (48 percent) of both organic shoppers and good cooks claimed to have excellent or good knowledge of food production. Dads felt more knowledgeable about how food was made than moms (43 percent versus 37 percent), and consumers under 45 years of age seemed to have more knowledge about food than those over 45 (38 percent compared to 32 percent).