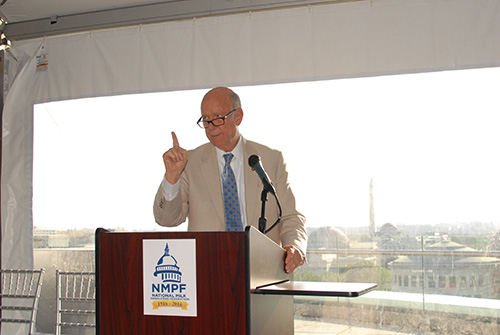 "TPP is very important, especially for dairy," reconfirmed Senator Pat Roberts (R-Kansas) and Chair of the Senate Ag Committee in a conversation with dairy farmers who gathered for the 100th anniversary celebration of the National Milk Producers Federation (NMPF). However, he also pointed out that trade bills such as the Trans-Pacific Partnership (TPP) need moderated expectations from both those who support and do not support trade pacts.

"But we really need leadership on both sides of the aisle to push TPP through," he said of the trade pact involving the U.S., Canada, and 10 Asian and Oceania countries. "We have fast-track authority," he said of Congress's ability to potentially move it through the approval process. "However, I cannot predict if we will get the TPP bill passed this year given the current election climate," Senator Roberts went on to say.

TPP was just one of the issues concerning agriculture highlighted by Congressional leaders at the June 7 gathering in Washington, D.C.

"We need to get a GMO bill done for dairy," asserted Debbie Stabenow (D-Mich.), who served as Chairwoman of the Senate Ag Committee from 2011 to 2015. "We are past time on this bill," she said, noting the Vermont law goes into effect in July 2016.

Of course, state rules such as those in Vermont regarding GMO labeling could fracture commerce by potentially setting multiple standards across the country. Additionally, there is the matter that over 2 trillion meals have been consumed by humans containing GMO ingredients in the past 16 years with no documented side effects regarding GMO foods.