The authors are veterinarians with the Quality Milk Production Services, Ithaca, N.Y. 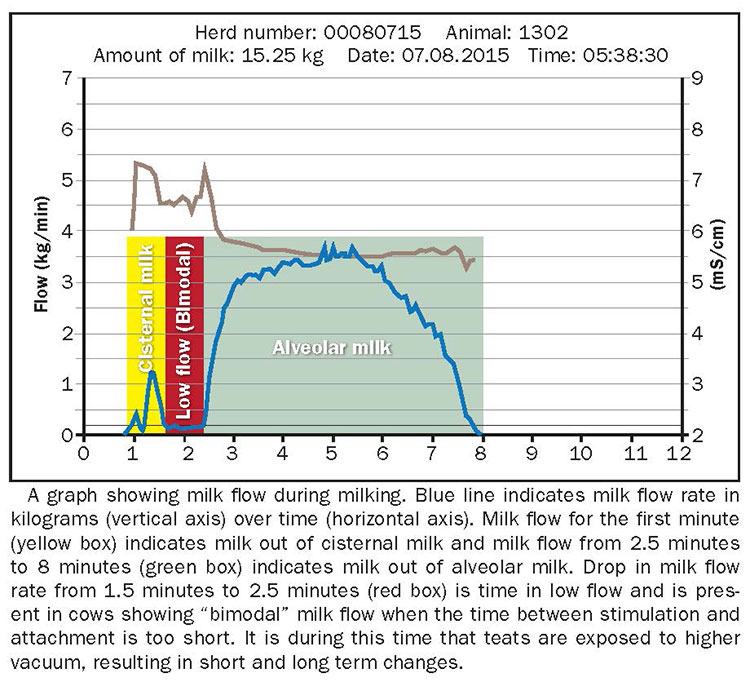 Milking in a tie stall or stanchion barn is a dance. It takes a certain sense and finesse.

You have to have a feel for time and know the cows individually in order to make sure that you get the timing right between predipping, forestripping, and attaching each unit. Unlike a parlor where we can time each step and create a consistent milking protocol for every turn of the parlor, milking cows in a tie stall barn with moving units has more inherent risk of variation in the timing of procedures. This requires that the milkers be more cognizant of why the timing of procedures is important.

The milker must remember that predip needs 20 to 30 seconds of contact time in order to effectively disinfect the teat skin and reduce the risk of new intramammary infections. They also need to understand that forestripping and wiping off predip stimulates nerves in the teat, which communicate with the spinal cord and then the brain to release oxytocin from the pituitary gland.

Oxytocin takes 60 to 90 seconds to travel the bloodstream to the udder, contract the myoepithelial cells, and push the majority of the milk (alveolar milk) down into the gland cistern so it can be harvested during milking. Missing this timing window means that the cow’s milk flow can drop after attachment if the unit was attached too quickly after forestripping. Having the unit on during the time when milk flow drops (low flow) puts stress on the teat ends, makes milking unpleasant for the cow, and can lead to greater risk of intramammary infections and high somatic cell counts.

Co-author Jessica remembers milking in a 32-cow tie stall barn in college, having a feel for how long it would take for each cow to milkout, and trying to gauge when to start prepping the next cow in anticipation of moving the unit.

But I had the luxury of being a college student. My only concern was to make sure to milk those cows well and try to do my absolute best to time each step perfectly. Add in other dairy farmers’ concerns of managing other employees, thinking about rations, crops, young stock, and the other day-to-day concerns of dairy farming, it’s hard to make sure that we’re not milking on autopilot.

Green Grass Farm was one of the first herds I visited after starting with Quality Milk Production Services (QMPS), as they routinely sampled the entire herd to screen for Staph aureus infections. While normally one person could sample in a tie stall setting, two people were necessary to keep up with Green Grass’ milkers. Two milkers with eight units between them (with automatic takeoffs) flew down the barn doing milking. However, that speed came with consequences.

Recently, Green Grass Farm contacted QMPS to investigate if there were any improvements that could be made to milking procedures. They were seeing teat end damage and felt that they were utilizing too much oxytocin. They are milking 130 cows in their tie stall. Bulk Tank average SCC (somatic cell count) had started climbing, along with new and chronic infections based on DHIA (Dairy Herd Information Association) test day information.

The milking equipment performed well when tested, with sufficient reserve and adequate milk line vacuum stability during milking. However, teat ends did not look happy during scoring. When looking at the teats within 1 minute after the unit detached, we found that almost three-quarters of the cows had at least one teat that was abnormal in color — either red or blue! In addition, almost three-quarters of the cows also had at least one teat with firmness at the teat end, indicating that blood and lymphatic fluid were not being massaged back up to the udder during the resting phase of pulsation.

These short-term teat end changes were concerning, especially when we also evaluated the long-term change of hyperkeratosis at the teat orifice — almost half of the cows had one or more teats score with “rough” or “very rough” teat ends, indicating that the short-term damage had been present long enough for the body to develop this callous.

But the most important question: Why were these changes present, especially when the milking system was working well? Short-term teat changes such as these can be secondary to milking equipment issues (ruled out in this situation), milking procedures, ATO (automatic takeoff) settings, or other influences surrounding the cows’ milking experience. Oxytocin use in this herd was significant, so we next looked at milking procedures.

Milking routine consisted of predipping the next cow that the unit would move to, retrieving the unit from the previous cow, wiping the cow, forestripping the cow, and then attaching the unit. Teat dip contact time was 56 seconds — great! However, stimulation time was 14 seconds, and average lag time between stimulation and attachment was 32 seconds. The goal for a herd milking 2x should be at least 60 seconds between stimulation and attachment in order to give the cow time to let-down. That was less than ideal.

Because there was not sufficient time between stimulation (from forestripping and wiping) and attachment, the milkers were compensating with utilizing oxytocin in the herd, creating many oxytocin dependent cows. But more than that, they were exposing cows to time where the unit was attached but there was not a large amount of milk flowing into the claw, resulting in a higher vacuum at the teat end. This occurred about 30 seconds into milking and can be seen in the Lactocorder graph of one of the cows with bimodal milk flow (see figure). The cow’s behavior during milking also matched this finding as many would step and kick during the first few minutes of milking, indicating they were not happy with the milking event.

As a result, flow rates were lower than our goals, resulting in longer unit on time, which meant that even though the milkers thought that their quick procedures meant that milking got done faster, it actually took them longer to get through the herd because of the extended unit-on time. And more importantly, negatively impacted the cows’ teat health.

Milkers can improve teat end health via a step-by-step approach.

As with any change, the milkers took a little time to adjust to the new routine, but they quickly began to see the improvement in milk letdown and cow behavior and became believers that this could work long term. Overall, oxytocin use was drastically reduced and unit-on time was shortened. In the end, by adhering to the natural timing of the cow’s stimulation and let-down response, both the cows and milkers were happier.

Over the next few months, average SCC for the herd slowly fell. This included a reduction in new infection risk and a slow improvement with reduced chronic infection rate. Production also improved and reached over 90 pounds per cow.