Can we raise smarter calves? 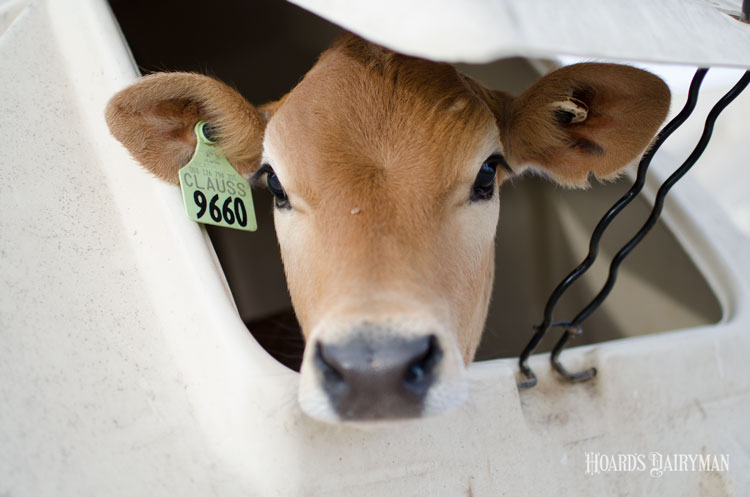 Calf housing is most often designed with health benefits and labor efficiency in mind. With limited complexity in their environment, calves will often turn to non-nutritive suckling for entertainment.

Is there an easy way to enhance a calf’s living situation?

Kelsey Horvath and others from the University of Florida wondered if an enriched environment would influence cognitive development in calves. She explained their work in her presentation at the Dairy Cattle Welfare Symposium held in Milwaukee, Wis.

Horvath said that some fairly practical forms of enrichment include extra space, a social companion (pair housing), a teat to suck on, or the introduction of hay or another textured feed. In their study, control calves were fed milk and starter in buckets. The hay group received milk and starter with the addition of hay access. The final group had access to starter and hay and was fed milk with a teat.

The amount of non-nutritive suckling was similar between the three groups; however, the group with the teat did less suckling on buckets or the pen and focused more attention on the teat. This was beneficial, Horvath explained, because the teat was cleaned, sanitized, and appropriately shaped to fit a calves’ mouth.

In the next step of their study, they compared control calves to those in an enriched environment (access to hay and the teat). Calves were tested at 5 weeks of age with a T-shaped maze that had a milk reward at one end. When a colored ball was placed in the maze, enriched calves were not phased and continued through the maze to the reward. The control calves, on the other hand, were very distracted and played with the ball before proceeding to the reward.

Horvath noted that access to hay and a teat could be very simple ways to influence behavioral and cognitive development in calves. She said that providing a more complex environment may help calves cope with novel situations, improve their ability to learn, and enhance welfare. The calves in the study will be freshening this year, and Horvath plans to see if benefits from enrichment linger later in life as well.