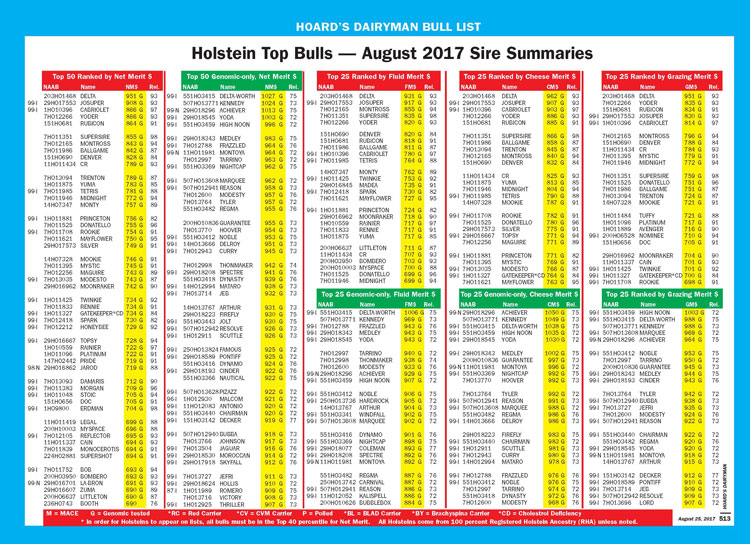 While the Hoard’s Dairyman Bull List will be distributed in the August 25 issue, we also will make it available to readers here. It can be downloaded by clicking this link.

To make heads or tails of all the top bulls, we sorted and ranked them on nine different traits or indexes in the Holstein breed. In Jerseys, we ranked bulls on two traits and all other breeds on one trait.

There were 3,775 bulls declared active by A.I. marketing organizations. That was down over 300 sires from April 2017. The grand majority of those culled bulls came from the category, “Genomic tested with milk daughters.” In fact, every breed had fewer declared bulls among those recognized by the Purebred Dairy Cattle Association. When comparing April 2017 to August 2017, the following happened:

• Milking Shorthorn dropped from 11 to 8

A.I. studs also paired down their genomic offerings, as 2,520 bulls were available this August compared to 2,702 in April. Even with the slight reduction, genomics continue to garner a larger portion of the bull rankings. Overall, 72.5 percent of the bulls were ranked on DNA evaluations without direct daughter data. This represents a new watermark and was up from last August’s 70 percent. Ayrshire, Brown Swiss, and Jerseys all had more genomic bulls available this summer, while other breeds were down slightly.
To comment, email your remarks to intel@hoards.com.
© Hoard's Dairyman Intel 2017
August 14, 2017
Subscribe to Hoard's Dairyman Intel by clicking the button below
Related