They established a new marketing standard 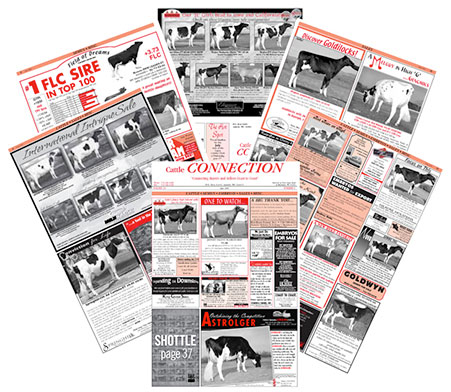 In 1990, Tom and Sandy Morris transformed advertising in for purebred cattle and dairy genetics when the couple launched the Cattle Connection. The idea initially was formed during a long drive and a cup of coffee. Our team recently interviewed Tom and Sandy about that genesis.

Question: In 1990, you founded the Cattle Connection. That monthly newspaper, mailed first class, quickly became the standard for advertising dairy cattle genetics. How did you develop the idea?

Tom: I was driving home from a sale in Green Bay somewhere on State Highway 29. It was late at night and very dark. I pulled into a gas station to fill up and went in to get a cup of coffee. In the entrance, the gas station had a number of newspaper-type brochures like the Cattle Connection, only advertising snowmobiles, campers, cars, and so forth. So I grabbed a couple of them and threw them in the car seat and started dreaming and applied my earlier journalism studies at the University of Wisconsin-Madison.

By the time I got home, I kind of had this thing partially sketched in my mind. Of course, we had to finish it. At the time, some potential customers were not very excited because it was an era when colored, razzle-dazzle pictures with super designs were in vogue. However, I thought a cheap, fast-turnaround type of a shopper would work better. Remember, most farmers were already getting a local shopper in the mail. It all came together pretty well.

Dave Dickson was very much involved behind the scenes along with a couple of other people. We had a summer intern put together the original mailing list because we wanted to include all active buyers and sellers. There were a lot of different little steps, but we certainly were on the way in 1990. Of course, when you start something like that, the fear of failure really is something the first few months. “Would people accept it?” we kept asking ourselves.

Sandy: Starting out and continuing to this day, our editors have been talented, farm-raised women who have built the Connection with their consistency and rapport with our advertisers. Working with good people has been our best asset.

Over the next six weeks leading up to World Dairy Expo, we will include bonus coverage with Tom and Sandy. Click here to read the full feature from our September 10, 2017 World Dairy Expo Supplement titled, “They’ve seen the show from every angle.”

Additional coverage in Hoard’s Dairyman Intel can be found by clicking these links: