Award namesakes are all Expo greats

As plaques, medallions, and trophies are passed out in the ring, the history of the show’s people is acknowledged and memorialized

By Dave Selner
The author is the executive director of the National Dairy Shrine. 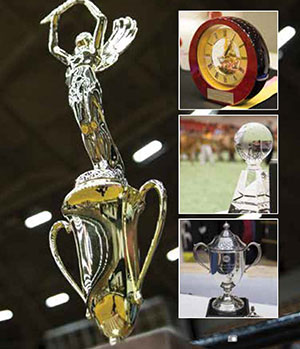 Trophies carrying the names of Expo pioneers like Hetts (left and top right), King (center right), and Blaska (bottom right) memorialize some of the most influential minds of Expo.
Articles on World Dairy Expo often focus on the beautiful cows and magnificent show pageantry, and there’s plenty of that to go around. At the same time, the people leading the show have also been a big reason why the show has grown in popularity and prestige.

These are the people whom most of the awards commemorate. During the 50th Anniversary celebration, the dairymen who mortgaged their farms to help start the show were often mentioned. Allen Hetts, Norman Magnussen, Eugene Nelson, and Howard Voegeli all put their personal wealth on the line for a dream they believed in.

In honor of their efforts and hard work, dairy show management named a few of the prestigious show awards in their honor. Dating back to the 1970s, the passing of two of these leaders led to the Allen Hetts Grand Champion Trophy and the Norman Magnussen Junior Champion Award for all breed shows. Later, the show added the Senior Champion and Intermediate Champion Awards. The Expo dairy committee quickly named these new awards for two of the other early leaders — Nelson and James Crowley Sr.

Eugene Nelson of Gray View Farms was honored with the Intermediate Champion Award due to his long-time status as dairy show committee chair.

James Crowley Sr. from the University of Wisconsin was decided on for the namesake of the Senior Champion Award. Doc Jim, who was widely known as a UW-Extension nutritionist, was one of the early promoters of the Wisconsin national show dream. He worked tirelessly to get the university and Wisconsin state government on board with this new venture and was one of the keys to the early acceptance of the show by these state organizations. Today, the Expo board still includes a representative from the University of Wisconsin-Madison and the State Department of Agriculture.

Additionally, Doc Jim was an actual show volunteer beginning at the very first show, and ultimately he served as the long-time dairy cattle superintendent for more than 30 years. Crowley developed the showring management structure that is still used today and recruited hundreds of workers to volunteer every year for numerous tasks during the show. Part of the family feel of the show can be attributed to Doc Jim’s warmth, down home appeal, and personal magnetism.

Beyond the breed shows

Howard Voegeli outlived many of the other founding fathers and wasn’t big on getting honored himself, so it took several years before his name would be added to an Expo award. After he was no longer able to actively serve on the board and as youth showmanship classes grew in popularity, it was decided by the dairy committee that the winners of each of the showmanship divisions should be honored with a named award. The intermediate showman now receives the Howard Voegeli Award in his honor.

Voegeli served for 30-plus years on the dairy show committee and was a strong advocate for dairy exhibitors making decisions about show management. He offered leadership on numerous major improvements in the show. Additionally, his Voegeli Brown Swiss exhibit was one of the great breeding herds that could be found in the barns every year. Voegeli also helped attract numerous international visitors to the show over the years to truly make it an internationally recognized event.

The Junior Showmanship winner received the W. Terry Howard Award in honor of Terry Howard, another UW-Extension dairy nutritionist who also volunteered every World Dairy Expo. Howard judged one of the first Expo cattle shows and served as the Holstein superintendent for many years. He later became the overall dairy cattle superintendent after Crowley’s retirement. His dedication to the success of World Dairy Expo is virtually unmatched. Howard spent thousands of hours volunteering for a dream that he truly believed in.

The Senior Showmanship winner receives the Keith King Award. The Milking Shorthorn breed was one of the early supporters of the Wisconsin national show concept, and King was the driving force. This Illinois Milking Shorthorn breeder was a great promoter for all breeds to come to the show and worked tirelessly to get other members of the Purebred Dairy Cattle Association (PDCA) to work with show management. He served on the show committee and Expo board for over 30 years, and his counsel and wisdom were greatly appreciated. King rarely missed any meetings, and when he spoke people listened and often found his solution was the best way to proceed.

Dairy cattle show enthusiasts have been a close-knit family since the very beginning. When you think of traveling for days in box cars between shows and attending shows all across the country, friendships were developed that lasted forever.

Even today, part of the anticipation of attending World Dairy Expo every year is seeing old friends and talking cows and family. So, it is not unusual that many of these family friends ended up getting involved with World Dairy Expo in some way.

One of the early friends and supporters of the show who also brought the influence of the A.I. industry to Expo was Frederick “Ted” Krueger. Krueger was the top cowman at Curtiss Breeding and purchased some of the most influential sires of several breeds, including the Holstein icon Pawnee Farm Arlinda Chief. Krueger felt it was essential to make sure dairymen could see the best genetics their breed had to offer in a showring setting, thus indicating the potential of artificial insemination in their home herds.

Krueger was a strong leader on the dairy show committee and was highly respected nationally. Krueger passed away suddenly while attending the National Holstein Convention. After his death, with the financial support of members of the National Dairy Shrine and the blessing of the show committee, a new award for the Premier Sire of every breed show was created at World Dairy Expo in his honor. Krueger would be proud of this legacy.

The most recent award to be named in honor of one of the early leaders is the Supreme Champion Award. The show did have an overall breed champion ceremony in the early days and awards were given. However, the pageantry of the Supreme Champion soon became one of the highlights of World Dairy Expo and a suitable trophy needed to be awarded. It was only natural that the award should carry the name of the longest tenured president of World Dairy Expo.

Greg Blaska, a dairy farmer from Sun Prairie, Wis., became involved with World Dairy Expo very early because of his leadership in milk marketing cooperatives and his friendship with several of the founders. The AMPI cooperative was a vital supporter in the early days and even housed the offices of World Dairy Expo for awhile. Several milk cooperatives put up money to make Expo viable, and because of those contributions they became involved on the board of directors and still have spots on the board today.

Blaska was a natural leader and had a unique ability to achieve compromise among differing views and still reach positive outcomes over difficult issues. His leadership was substantial and consistent even as
Expo went through several leadership changes in the general manager position.

The showring family legacy continues today, and the feel of coming to Madison still excites a new generation of dairy enthusiasts. As new leaders are assuming prominence, there’s no doubt additional show awards will be named honoring this next generation of visionaries.