How long is too long to delay colostrum feeding?

Calves not only were healthier with early colostrum feeding, their digestive tracts had more beneficial bacteria populations.

By Amanda Fischer And   Michael Steele, University of Guelph
The authors are a master’s degree candidate and an assistant professor at the University of Alberta. 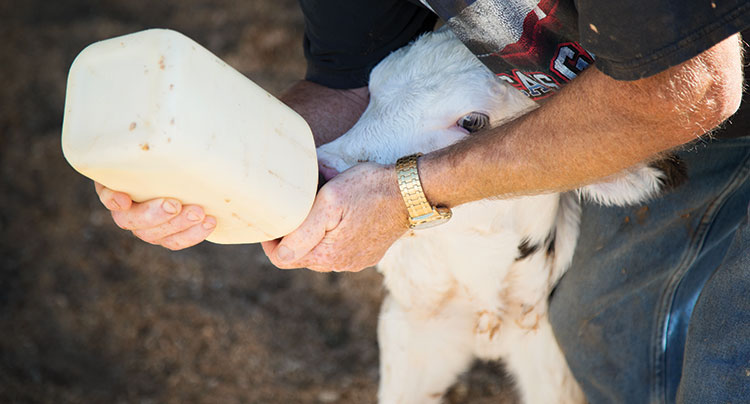 The first colostrum feeding not only helps calves establish passive immunity, it also populates the intestinal tract with bacteria needed for digestion.
If you had to estimate, how many hours, on average, would a newborn calf go without colostrum on-farm? If you are busy milking . . . it could be two hours. If you don’t have overnight staff . . . it could be anywhere from six to eight hours.

Previous studies have shown that many farmers report feeding calves within two hours after birth. However, by carefully monitoring staff performing on-farm colostrum feeding, researchers determined that farmers often report the time the calf is found, not born.

This makes a big difference. That means that it is highly likely that many newborn calves may not be fed the first colostrum meal until six hours after birth or later.

With this newfound evidence, researchers at the University of Alberta set out to determine exactly how detrimental delaying the first colostrum meal after birth is for your dairy calf.

It is well known throughout the dairy sector that the successful passive transfer of immunoglobulins or IgG (defined as calf serum IgG greater than 10 milligrams per milliliter) is an indicator of a low disease risk in the newborn calf. However, research in regards to the bacteria that reside in the gut has demonstrated that the presence of specific bacterial groups also may have implications for health and future performance.

Specifically, lactic acid bacteria (LAB) in the intestine can produce energy for colon cells and assist in the development of gut immune structures. Additionally, certain species of bacteria are associated with weight gain in preweaning heifers. Therefore, the aim of this study was not just to characterize how delaying the first colostrum meal affects the passive transfer of IgG, but also how it may influence specific bacterial groups in the small and large intestine of the calf.

In order to conduct the study, researchers assigned newborn Holstein bull calves to one of three treatment groups: calves fed colostrum at 45 minutes of life (zero-hour group), at six hours of life (six-hour group), or at 12 hours of life (12-hour group). All calves received pooled, pasteurized colostrum containing 62 grams of IgG per liter at their respective feeding time at 7.5 percent of birth body weight (3 to 4 liters). Exactly 12 hours after colostrum feeding, calves received milk replacer at 2.5 percent of birth body weight (1 to 1.5 liters) every six hours.

In order to measure IgG concentrations, jugular catheters were inserted in all calves and blood samples were taken every three hours beginning at birth. To measure the presence of specific bacterial groups, calves were euthanized and dissected at the end of the second day of life to collect the small and large intestinal contents and tissue.

As expected, zero-hour calves had higher serum IgG concentrations than six-hour and 12-hour calves. Calves fed at zero hour also absorbed 50 percent of the available IgG from colostrum, while six-hour and 12-hour calves only absorbed 35 percent. Surprisingly, no calves in the study, even if they were fed at 12 hours of life, failed passive transfer (serum IgG under 10 milligrams per milliliter). This is likely due to the high volumes of good-quality colostrum that were provided to all calves (197 grams of IgG provided to each calf).

However, the idea that feeding high-quality colostrum can compensate for late feeding is not recommended. For example, waiting until six hours or 12 hours of life or later results in the calf being unprotected from any pathogens they may encounter during the time they are not fed, such as from contact with the dam or other calves, or in the calf pen. Also, this study confirmed that calves fed earlier achieve higher serum IgG concentrations than those fed later, thus offering them maximum protection from gut pathogens and disease. 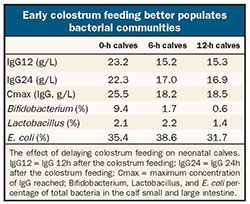 In regards to the specific bacterial groups, zero-hour calves had a higher prevalence of lactic acid bacteria attached to the colon. This is considered beneficial since they can promote the growth of the intestine and prevent pathogens from binding to the calf gut. In addition, zero-hour calves displayed a higher prevalence of total Escherichia coli. This result was not unexpected, since E. coli has previously been shown to be a common bacterial group in calf gut from one to seven days of life.

Why would calves fed colostrum sooner have a higher prevalence of bacteria in their gut?

It has been shown that colostrum contains compounds that can promote the colonization of early beneficial gut bacteria. Therefore, this evidence suggests that the first colostrum feeding is essential for the colonization of early life gut microbiota. That means delaying colostrum feeding may impact the bacterial communities in the intestine, which may have long-lasting effects on the gut health and productivity of the calf.