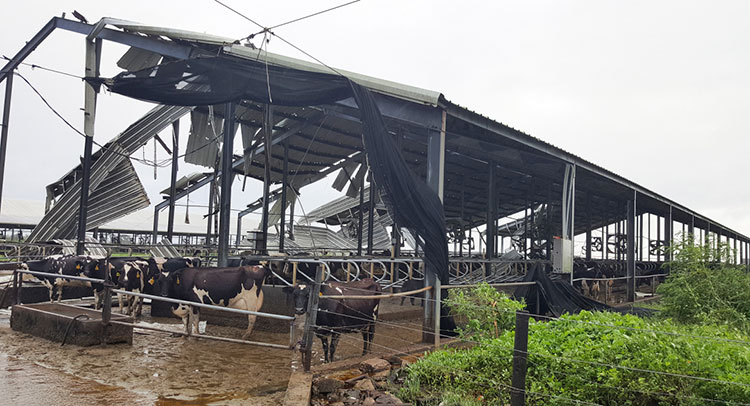 Hurricane Irma was one of the largest, most powerful hurricanes ever recorded in the Atlantic Ocean. When that storm made landfall, it ravaged every one of Florida’s 67 counties.

In its wake, Florida’s Department of Agriculture and Consumer Services documented the impacts for all of agriculture, including dairy. It estimated that dairy farmers in the Sunshine State lost $11.8 million.

Florida is home to more than 100 dairy farms and 125,000 dairy cows with annual sales of over $500 million. Many milk processing plants in Florida shut down operations before, during, and after Hurricane Irma. That meant dairy farmers had no markets for days. It’s been estimated that there were $1,951,695 in lost sales due to dumped milk and milk being sold at lower pay prices in other milk markets.

Cooling systems, shades, and buildings were badly damaged. Plus, electrical power was out for several days. As a result, heat-stressed cows ate less and spent more energy cooling their bodies. That has both short- and long-term impacts because the recovery process takes time. In the next four months alone, dairy farmers could lose an additional $7.5 million in revenue.

Of Florida’s 100-plus dairy farms, 40 experienced heavy damage from the hurricane. All told, debris cleanup, fence repairs, building reconstruction, and equipment restoration could cost $59,000 per farm.

On top of all that, crop losses for Florida’s dairy farmers could run an additional $7.5 million.

Two tales to the growing season . . . so far

Milk prices were as diverse as milk states
By Corey Geiger, Managing Editor