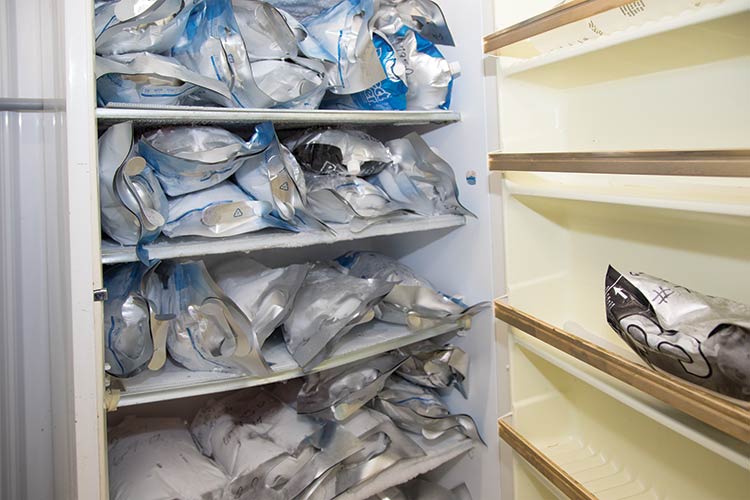 Colostrum should be refrigerated within two hours and fed within three days. If intended to be fed beyond that point, colostrum should be frozen.
While colostrum is known to be needed by newborn calves as they are born without any immunity, there is more to this picture. First, there are a number of key factors that determine how much immunity the calves get from being fed colostrum. For example, the ability to absorb antibody proteins (primarily immunoglobulins) by the calf from colostrum is very dependent on the time of consumption in relation to the time of birth. By four hours after birth, antibody absorption is already reduced by 25 percent and is virtually gone by 24 hours of age.

This leads to the question: What are immunoglobulins and what are their functions? Typical immunoglobulin distribution in colostrum is about 85 to 90 percent IgG, 5 percent IgA, and 7 percent IgM. IgG is the main contributor to systemic immunity but also may function within the intestine.

The three primary sources of contamination have been found to be dirty udders, bacterial proliferation after improper storage, and dirty equipment used to milk, transfer, and feed the calf. The latter category is the most common problem source of contamination.

Colostrum should not be pooled unless it has been or will be pasteurized or heated before feeding. If fed fresh, refrigerate colostrum within two hours and use it within three days of collection. Beyond this time frame, freeze the colostrum.

When heat treating colostrum, use a well-insulated, well-stirred batch pasteurizer, which can maintain 140°F for one hour before cooling down and feeding or storing. This operation must be closely monitored, controlled, and periodically checked for efficacy by sampling and culturing both before and after processing.

An enlightening study was done about 20 years ago. A herd fed every other heifer calf born in one year either 2 or 4 quarts of colostrum at the first feeding. After that, all heifers were fed and managed the same. Those calves only fed 2 quarts had twice the veterinary costs, and at breeding age those fed 4 quarts had 0.5 pound more daily gain.

Why this difference? Colostrum has been found to have over 200 bioactive compounds, which affect growth, nutrient absorption, and bacterial exclusion. Look at the table compiled by Mike Van Amburgh at Cornell University and based on various published studies. 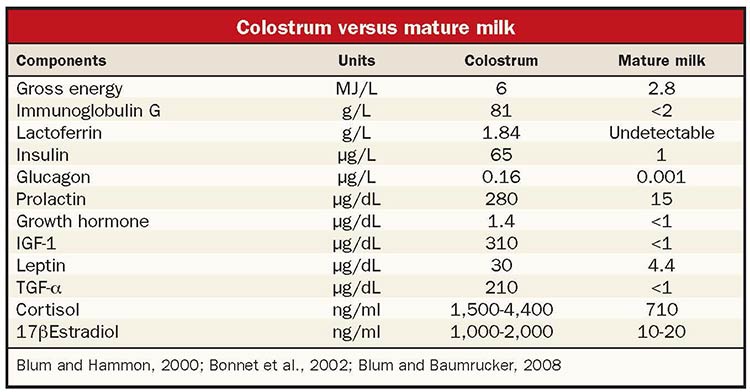 Lactoferrin, which is an antibacterial, is undetectable in milk but present at a high level in colostrum. The balance of components shown in colostrum are much higher than in milk. Most of these are hormones, which are known as anabolic in that they promote growth. This reflects a newer area of science understating: epigenetics. High level of nutrition, IgG, and metabolic components may well activate more genes which facilitates growth, health, and subsequent milk production.

Some readers may remember when it was standard practice and recommendation that calves be fed colostrum and transition milk for the first three days of life. This may still be well advised.

Colostrum by definition is only the very first milking after calving. Previously, cows were milked out for three days before the milk was commingled with that of the rest of the herd.

I think this practice went away as herds got larger, and it became more troublesome to separate out and feed transition milk to calves. The graph shows that while major milk components become more normal after 24 hours, it does not show bioactive compounds that could still be present at intermediate levels but not be as obvious as the other major components of milk.

To the value of colostrum, now add findings from the University of Alberta scientists’ presentations at the 2017 American Dairy Science Association (ADSA) annual program. Their findings suggest that feeding dairy calves colostrum immediately after birth can improve the passive transfer of IgG and the colonization of beneficial bacteria in the colon.

Both characteristics are hypothesized to assist in protecting the calf from enteric infections during the preweaning period. Findings from another study indicated that the colonizing microbiome is an essential factor regulating the rapid development of the mucosal immune system during the first week of life.

Not only does colostrum have value for its antibody absorption by the calf, but its many bioactive compounds have positive effects on growth, nutrient utilization, and subsequent milk production. These compounds and nutrient levels would be intermediate in transition milk. So, if you can, also feed transition milk to calves for their first three days of life. A legacy lives on
Features
Related to:
features, calves, colostrum
In Features

My cows’ teats are cleaner than your hands
By A.F. Kertz