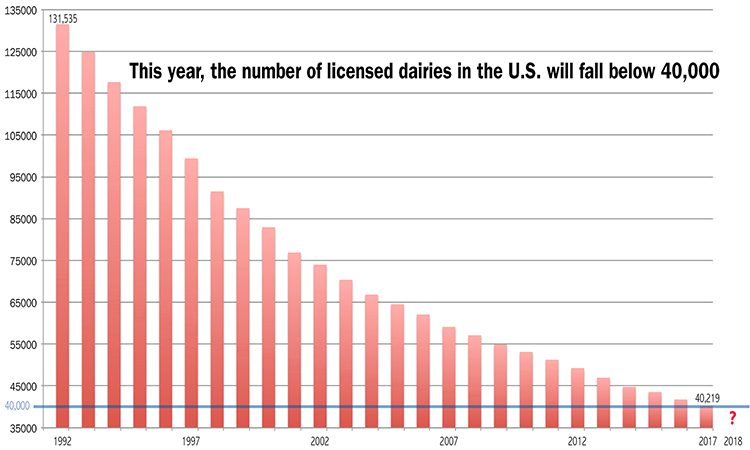 U.S. dairying will cross another pause-to-consider threshold in 2018: The total number of farms that are licensed to sell milk will fall below 40,000.

Like previous round number mileposts, it is a sobering reminder about the steep downsizing of the industry that has occurred since the 1935 Ag Census, when the number of “farms with milk cows” (any farm having at least one head) peaked at 6.812 million.

It is also another wakeup call about how few milk producers are left.

Licensed dairy farm numbers began being tabulated in 1992, providing an immensely more accurate picture about commercial milk production. According to USDA, total farm numbers in 2017 were 40,219, a drop of 1,600 from the previous year.

Farm numbers are not only certain to fall below 40,000 this year, but unless the smallest one-year decline in history somehow happens (the current smallest decline is 1,275 dairies in 2015) they will also drop below 39,000.

To put 40,000 dairies nationwide into perspective, Wisconsin and Minnesota alone had 45,851 between them in 1992. Of every 10 dairies in the U.S. that were milking cows then, only three were still in business last year.

How did the survivors do it?

Did they have a secret?

Dairy farm number declines in each state, by the way, have not been more or less similar.

In the last 25 years North Dakota, Arkansas, and South Dakota have all seen at least 90 percent of their dairies close. At the other end of the spectrum are Arizona (20 percent less) and California (41.9 percent).