They bulked up component production

The project included 20 farms with the overarching goal to improve net milk income per cow per day. That was after accounting for concentrate and total feed costs. 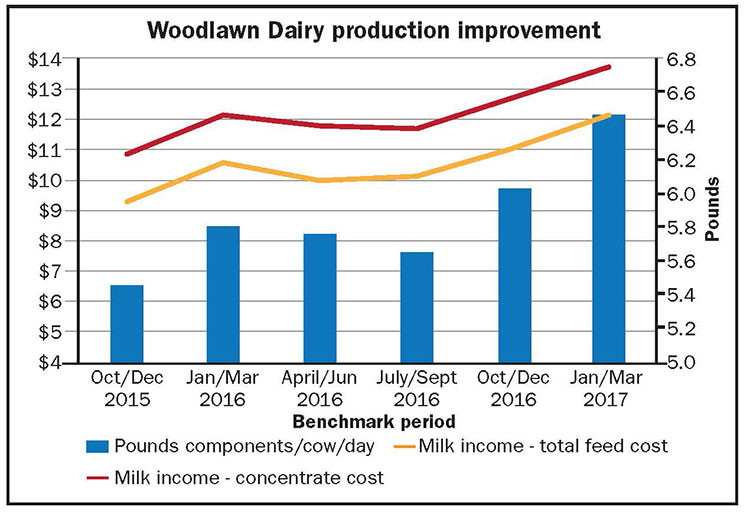 Tim and Sue Cantwell, along with their son Michael, operate Woodlawn Dairy, a 175-cow dairy located in Richfield Springs, N.Y. Michael recently graduated from Morrisville State College with a degree in dairy science and has come back to join the home farm.

They milk 2x and have been in the mid-80s to low 90s for pounds of production per cow per day. However, their herd has struggled with low butterfat at times, especially in the summer when cows dipped below 3.4 percent. That significantly affected their pounds of components per cow.

Production was at 85 pounds with a 3.38 percent butterfat and 3.05 percent protein at the beginning of the project. Component prices were very similar to today’s prices, with butterfat carrying the milk check. The farm’s mailbox milk price was $17.27. When comparing themselves with others involved in the project, they became aware of the fact that their milk price was one of the lowest per hundredweight (cwt). Low butterfat was diagnosed as the reason.

In June of 2016, they began working with Kienan Gridley of Rapp Dairy Nutrition, Fabius, N.Y. One of the goals was to improve component production and the economic bottom line.

Wet brewers grains was removed from the diet, and small incremental changes were made that resulted in 91.4 pounds of milk with a 4.03 percent butterfat and a 3.05 percent protein. Using our “fixed milk price” approach, their milk price rose to $19.17 per cwt., nearly a $2 per cwt. improvement.

In addition, production per cow also grew by 6.4 pounds. Figure 1 shows the pounds of components produced per cow per day and the net milk income per cow per day after all costs and after concentrate costs.

One of the culprits identified for the low butterfat was high polyunsaturated fatty acid levels in the diet. Both the corn silage and high-moisture shelled corn became drier during the study period. The addition of Palmit 80 fat, amino acid balancing, the targeted feeding of degradable and bypass amino acids, and the reduction of corn distillers in the diet all contributed to the significant butterfat improvement. Net milk income minus concentrate cost improved by $2.79 per cow per day from the beginning of the project to the end. 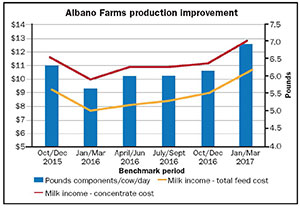 Frank Albano and his brother Marc and their families operate Albano Farms, a 175-cow dairy located in Stamford, N.Y. They milk 3x in a very large tie stall barn.

At the beginning of the project, their production was at 90 pounds per cow per day with butterfat at 3.91 percent and protein at 3.10 percent.

Their production was good, but concentrate feed costs per cow per day were high when compared to other project participants at similar production levels. Extruded soybean meal was pressed on the farm with an Energrow Soybean press. They got into some high-moisture shelled corn that was a more floury starch hybrid and butterfat dropped some.

In late summer of 2016, they decided to work with Gridley on their nutrition. Initially, they upped crude protein levels in the diet, which greatly improved production and growth in first-calf heifers. Raw soybean oil from the on-farm soybeans was the primary suspect for the low butterfat test and this was eventually confirmed.

Adjusting the press to raise heat and pressure and lower the flow of product showed no improvement, so corn distillers was taken out of the custom grain mix and the extruded soybean meal was removed from the diet. It was replaced with a combination of SoyPlus, soybean meal, and canola. The farm’s soybeans are now sold to a local feed mill. Some Palmitic rumen protected fat also was added to the new mix. Amino acid balancing also contributed to success here, including both protected and unprotected amino acid sources.

The results achieved on these two dairies were an effort on everyone’s part. The dairy producers consulted with both Gridley and I as they searched for input to correct the low butterfat issues. As consultants, it was important that we were both on the same page, which gave the producers confidence to move forward with changes.

Both farms strive for high-quality forage and have corn silage with above average fiber digestibility. The brown midrib corn silage at the Albano Farm has shown positive milk responses.

Cow comfort is also very important on both farms. The Cantwell Farm has deep sand beds and excellent ventilation. The Albano Farm has tunnel ventilation. They redesigned the stalls several years ago to improve cow comfort and have mattresses.

What is going on today?

The Cantwell Farm has put on a small addition to relieve overcrowding and replaced freestall loops. Another 3 to 4 pounds of production was the result, likely in part due to a reduction in stocking density. The Albano Farm is building a new freestall barn and milking parlor (put inside one end of the current tie stall barn). They are hoping for better cow comfort, cleaner cows, an improvement in somatic cell count, and even greater production.

Lessons to learn from avian influenza
Features
Related to:
features, management
In Features