The kick that saved her life

Being kicked by a cow isn’t what most farmers consider a highlight of their day . . . but for one New England woman, she believes it’s what saved her mom’s life. 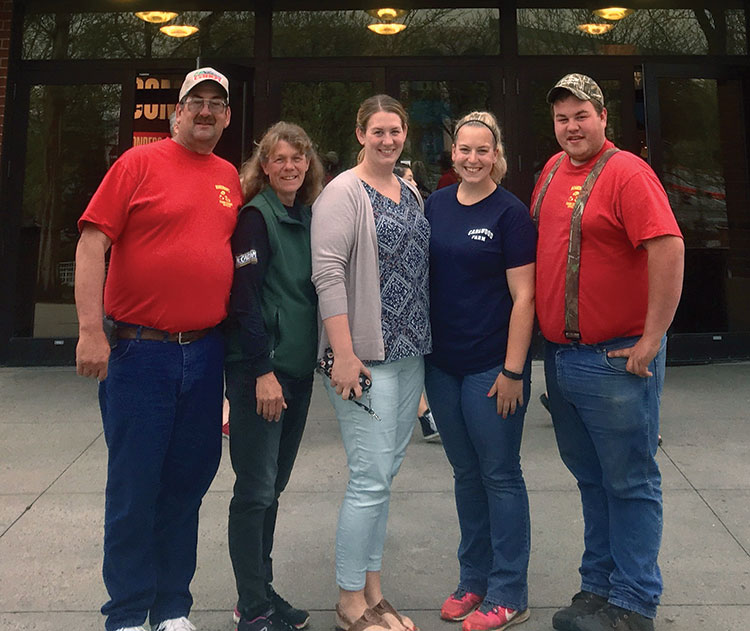 The Boardman Family makes up the fourth and fifth generation to call Carlwood Farm in Canaan, Conn., home. Pictured from left to right are Rick, Sandy, Sheri, Rene, and Ricky.

Rene Boardman, the fifth generation of family members to live and work on Carlwood Farm LLC in Canaan, Conn., said, “It was a cow’s kick that sent my usually healthy mom to the doctor — and led to a cancer diagnosis that otherwise may have gone undetected.”

According to Rene, Sandy Boardman was giving routine vaccinations in October 2016 when she was kicked in the ribs by “Heidi,” a cow known to be one of the gentlest, friendliest cows in the herd. A few days later, after a second trip to the emergency room, follow-up X-rays and a CT (computerized tomography) scan showed a definite broken rib . . . and something else.

“Doctors also were concerned by a spot on her kidney that showed up on the scans,” Rene said. “Further tests resulted in doctors finding a cancerous tumor on my mother’s kidney.”

Surgeons removed 20 percent of her kidney and she was able to come home on Thanksgiving Day.

Rene said her mother has always been in great health, leading an active lifestyle by doing all the daily chores and working countless hours, rarely getting sick. “As most farmers are, she is also pretty stubborn and will usually put off going to the doctor,” Rene said. “We are so thankful for Heidi not harming her badly, but giving her a reason to be checked out by a doctor.”

Pineyvale Destry Heidi was purchased as a calf from a New York herd dispersal in December 2012 by Rene’s grandfather Doug Carlson. “Initially, my mom told my grandpa that we didn’t need any more animals, and she wasn’t super-happy he bought the calf,” Rene said. “But I think it’s safe to say we’re glad he did buy Heidi that day.”

Sandy and her father farm in a partnership. She met her husband, Rick Boardman, when he was the farm’s milk truck driver, and they married in 1987. Children Sheri, Rene, and Ricky are all involved in the farm but have off-farm jobs as well. Sandy takes care of the daily farm chores, while Doug still does field work and maintenance. Doug’s wife, Cris, plays an active role as well.

Carlwood Farm started out with only one tillable acre and 20 cows in the early 20th century but has grown to 200 acres and 60 milking cows. As with most family farms that survive almost 100 years, they have seen their share of trials. However, their family, faith, and deep farming roots have kept them going.

“We trace our American farming roots to my great-great-grandfather, who emigrated from Sweden and purchased a plot of land near Canaan,” Rene said. “My great-grandpa, Doug Carlson, purchased his own plot, which was to become Carlwood Farm, and at the time only consisted of a single acre.”

A string of family setbacks

Sandy’s brush with cancer wasn’t the first time the family dealt with the deadly disease. “In 1959, my mother’s father took over the family farm when he was 16 after his father passed away of cancer,” Rene said. “He took over the farm with the help of his mother, Isabelle, then married my grandmother, Cris, and expanded the farm to where it is now.”

When Doug and Cris were growing their family and the farm, their 14-year-old son was involved in a farming accident and lost part of his leg. “This was another in what seems like a string of setbacks our family had to overcome,” Rene said, “first with my grandfather losing his father and then dealing with his own son being involved in a serious accident.”

Her uncle adapted well to life as an amputee, becoming a star athlete in high school and not allowing his injury to slow him down.

In March 2017, Doug suffered a stroke, spending time in the hospital and then two months in a rehabilitation facility. Around the same time, his wife, Cris, was also in the hospital with heart problems.

“Thankfully, both are doing well today and are another example of how tough we all are,” Rene said. “While my grandpa’s health now limits what he can do on the farm, he still tries to be an active part of the daily routines. My grandmother is always there for support and loves spoiling us with her delicious home-cooked meals.”

In June 2017, Rene’s father, Rick, was scheduled to start six months of chemotherapy for leukemia. Sandy took him to most of his treatments. “She would hustle through farm chores, take dad to treatment, and return back to do evening chores,” she said.

Before the treatments started though, Sandy and Rick were determined to celebrate another milestone — their 30th wedding anniversary. Friends and family handled farm chores so they could take a long weekend away together — the first family vacation in 10 years.

In October 2017, a windstorm destroyed the farm’s heifer barn. “We were devastated,” Rene said. “We kept saying to ourselves, ‘Haven’t we been through enough already?’” The community came to their rescue, and a crowd-sourcing campaign raised funds that allowed them to rebuild. 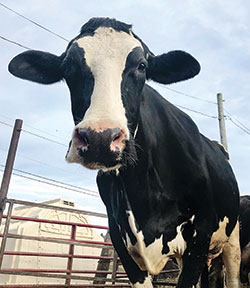 A moment of insubordination by the Boardman’s typically calm and sweet cow Heidi led to a life-saving cancer diagnosis.
Rene said she has often thought of how things could have been different if Heidi hadn’t kicked her mother back in the fall of 2016. “We are all so thankful how everything unfolded that fall, and we live life to the fullest,” she said. “It really hit me that Christmas morning, a few weeks after my mom had the cancer removed. When Heidi walked into the milking parlor, I felt such a mix of emotions. I was so thankful I would be able to spend many more Christmases with my mom now, because Heidi saved her life.”

Sandy Boardman earned a degree in animal science from the University of Connecticut in 1985 and initially wanted to be an agriculture education teacher, but found that she loved working on the farm more and continued to work there after college.

“I have never seen someone so dedicated to their animals as my mother,” Rene said. “I believe now more than ever, my mother was destined to be a dairy farmer.”

Rene added her outlook on life has changed since her mother’s diagnosis. “When a situation like that happens, and things turn out okay, you have to be thankful for God’s greater plan,” she said. “He instilled a love for dairy farming in my mother for a reason. Through hard times, health issues, and low milk prices, my mother never stops loving her farming way of life or her animals.”

Doctors are confident Sandy is cancer-free. Rene said during the initial recovery her mom was anxious to get back to the barn and her “girls,” but they had to convince her to slow down and rest. In February 2018, however, carpal tunnel surgery kept her out of the barn for only a week before she was back to work.

Rene said in these difficult days facing the dairy industry, the Carlson-Boardman clan doesn’t back down.

“With each minor setback we endure, we constantly tell ourselves, ‘It could be worse,’” she said. “Optimism is a huge factor in why we are still farming today. We all have bad days on the farm, but for every bad day, there are 100 great days, so in the end it’s all worth it. We love our family farm and hope to raise many more generations on it in the future.”

In the meantime, they give Heidi an extra scratch and whisper “thank you” as she passes through the milking parlor. “We experienced a true miracle at our farm, and it proved to us there’s a reason why the long hours, low milk prices, and the struggles that sometimes come with farming are all worth it,” she said.