What if we got rid of livestock?

Cutting animal agriculture out of the picture could eliminate some concerns while creating some new challenges.

The authors are a research scientist at the U.S. Dairy Forage Research Center in Madison, Wis., and assistant professor of animal and poultry sciences at Virginia Tech. 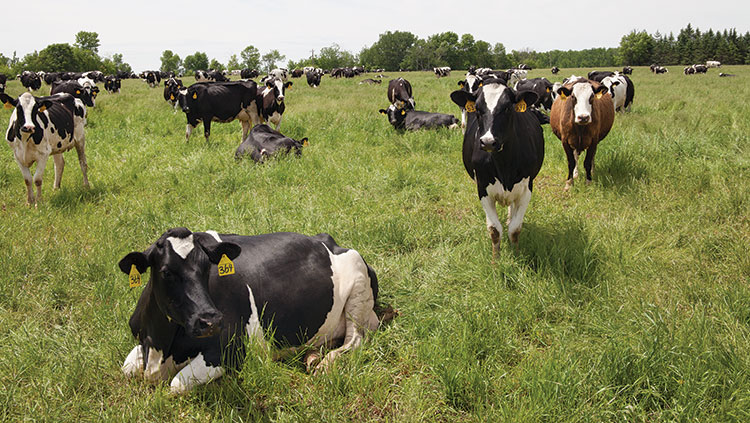 Humans, plants, and animal agriculture alike are part of the complex web that makes up a sustainable future for our world.
Our world is all about balance. Just enough of this, not too much of that. Keeping this balance is important for maintaining sustainability of systems, whether we’re talking about the environment or our cows’ rations.

As if maintaining this balance isn’t challenging enough, biological systems present an additional complication. Changing one part of the system results in shifts elsewhere. These related changes may be unexpected. Or, they can be anticipated if you have enough information, like predicting that there will be ripples when you toss a rock into a pond. In short, when we think about managing systems, we need to see the big picture response in addition to the small piece that we’re focused on.

Part of the world’s web

Speaking of big pictures, we often think about the systems we manage, such as farms, however, we rarely consider the systems we are a part of. People are part of a food system, a food web, along with crop and animal agriculture.

Like a food web in nature where plants grow with sunlight and water, mice eat the plants, hawks eat the mice, and their feces and carcasses fertilize the plants — everything has to balance and supply the needs of each part, or the system won’t be sustainable. In society’s food web, resources — both products and “wastes” — are traded among human society, crop agriculture, and animal agriculture.

“Wastes” can be the resources made by one group that they can’t use, but that another group can. For example, animal manure fertilizes crops, and food, biofuel, and fiber by-products from human society are feed for animals. Enormous amounts of products and wastes are traded among people, plants, and livestock. These exchanges make for an integrated and complex system of supplies and demands.

It has been suggested that getting rid of livestock will save the planet. Livestock do make greenhouse gases that affect climate change, and they may pollute water or compete with people for food. The list goes on. In addition to environmental challenges, livestock products have been criticized as unhealthy.

So, why keep farm-raised cattle, sheep, goats, poultry, and fish? Remembering natural food webs and the need for balance, if you remove livestock from society’s food web, what happens?

A world with no livestock

When we evaluated what would happen if we removed livestock from U.S. agriculture, some key questions we had were:

1. What will you do with the land currently used for silage, hay, and tillable pasture?

2. How will the food supply change?

3. How well will you be able to feed people?

4. What happens to greenhouse gas emissions?

1. The land. If we eliminated farm animals, all 415 million acres of permanent pasture and rangeland would go out of food production. We can’t be certain what will happen to the 56 million tillable acres used to grow forage, but we assumed most of it would be converted to crops for people, except for 4.4 million acres that would be used to grow hay for the U.S.’s 10.2 million horses.

Some have suggested that the tillable forage acreage could be let go to wildlife habitat, but we disagree — short of a massive government program to take that land out of production, farmers would still need to earn a living from working the land. We did assume that tillable land was reallocated to grow crops for people based on current proportions of land use for 89 crops. That added 1.8 million acres of fruits, vegetables, and nuts.

Why not add more fruits and vegetables? The U.S. currently imports 51 percent of the fruits and 39 percent of the vegetables that we consume. We assumed that if it was profitable to grow these high-value crops, farmers would already be doing it. Climate, weather, soil quality, water availability, labor, markets, profitability, and risk all affect what crops can be grown in different areas.

2. Food supply. With livestock gone and all crops not used for industrial products and seed available as food, the food supply would grow by 23 percent of what the current system with animals provides. That’s over 66 million more tons of food available to feed people in the U.S. or to export. However, with only crop agriculture, the food supply would also look a lot different.

Grain would make up 58 percent of the food, up from 21 percent — 77 percent of those grains would be corn. Legumes would go up from 1.4 percent in the present system to 10 percent if animals were removed. Of the legumes, 92 percent would be soy and soy flour.

The total amounts of essential nutrients available from foods generally went up with livestock gone. Some exceptions were fatty acids (long chain omega-3 fatty acids, arachidonic acid), calcium, and vitamins A, D, and B12. Those nutrients are in greater supply or are only found in foods from animals.

With rendering products no longer available, foods would have to be diverted from use by people to provide 727,000 tons of protein and 143,000 tons of fat to feed our 70 million dogs, 74 million cats, and the rest of our pets.

3. Feeding the population. People don’t eat nutrients, they eat food. And a general recommendation is that it’s better to get nutrients from foods than from supplements. We ran least-cost diets intended to support the U.S. population based on the foods available in systems with or without animals.

Without supplements, the diets from the current (with animals) food supply was deficient in vitamins D, E, K, and choline. However, without animals, diets were deficient in those nutrients as well as in calcium, vitamins A and B12, and in fatty acids (long chain omega-3 fatty acids and arachidonic acids). These fatty acids are important for normal cognitive and visual development in children. Calcium and B12 are also crucial for our health. If you don’t eat foods from animals, you have to take B12 supplements.

People would also have to eat more food in the plants-only system because plants are not very concentrated sources of essential nutrients. And because of the sheer amount of grain available, our diets would be 85 percent grain.

Why 28 percent rather than the 50 percent that animals produce?

Greenhouse gases from industrially producing fertilizer to take the place of manure is part of the answer. Incinerating inedible by-products is another part. The change in cropping systems with all of the emissions now credited to people is the other major part of the picture.

So, what happens when you remove animal agriculture? Some good things, some not so good. It’s complex. More food, more nutrient deficiencies, less greenhouse gases.

Agriculture is essential for providing people with food, products, and livelihoods. When we look at how we will feed people and make the system work in the long term, we need to look at the entire system, not just one or two aspects that we want to change.

Common Threads - May 2022
Features
Related to:
features, consumers
In Features