We’re all getting older, not just farmers 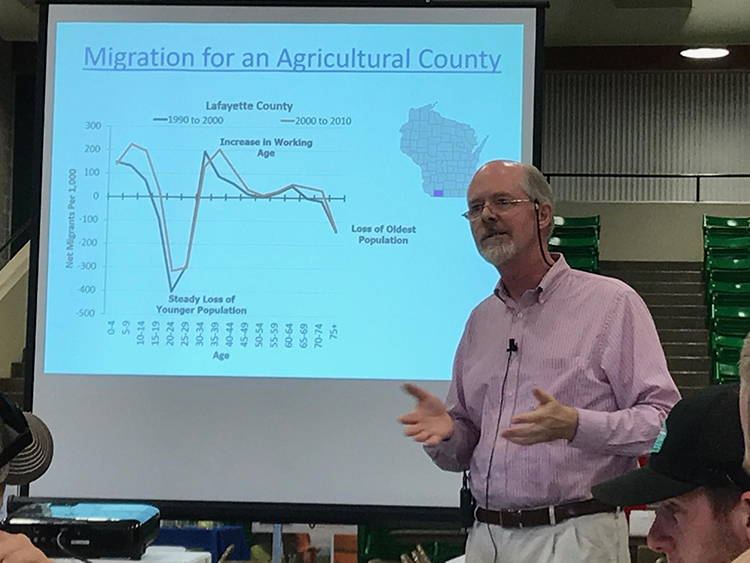 It’s well-known that the average age of farmers is steadily climbing upward. The same could be said about the general population.

This shift toward an older population has been inevitable, he explained. The large baby-boom generation, born between 1946 and 1964, is progressing through their lifetimes.

This trend is affecting our farming communities at a faster rate. “Ag economies tend to be older,” he noted. Looking at the agriculturally-based state of Wisconsin, he pointed out that the oldest counties are in the northern and central parts of the state, while the youngest populations tend to be in the metropolitan counties.

Peering into the future, Egan-Robertson said about a quarter of the population in the state of Wisconsin will be 65 years old or older by the year 2040. Today, that number is at 13 or 14 percent. By 2040, more than half a million people among the state’s projected 6.5 million residents will be over 80 years old.

“Both rural and urban areas face challenges by the inevitable age wave that is coming, affecting not only Wisconsin but the whole country,” he said. This means communities must plan for an older population, including residential options, transportation, and health services.

He also spoke about the “sandwich generation,” those individuals who have both children and aging parents who need care. This can be stressful, particularly for people that have moved away from their hometowns and must provide care at longer distances.

Another aspect of an aging population that directly affects agriculture is the size of our nation’s labor force. “It feels like a pinch now, and it’s going to get even worse,” Egan-Robertson said.

Another population trend he addressed is the migration from rural to urban areas.

“The shift from a majorly rural population to a majorly urban population has been a long process over time,” said Egan-Robertson. Using Wisconsin as an example, he shared that in 1890, two-thirds of the state’s residents lived in rural areas. By 1930, the population was split in half between rural and urban settings. In 2010, that trend had completely reversed, and two-thirds of Wisconsin’s population lived in urban areas.

Over the past 10 years, Wisconsin saw about a 3 percent population growth, which was slower than previous decades. Most growth and development occurred in smaller cities and villages adjacent to urban areas.

The 26 counties considered to be metropolitan gained 5 percent of population, which means the remaining counties lost 1.5 percent of their residents. Egan-Robertson shared that most of the population loss happened in far northern counties and in more agricultural counties.

These are also the counties that are losing people in the young adult demographic, which is bad news for agriculture and beyond. “An exodus of young people strains a community and the socioeconomic infrastructures that support a community, both economically and in terms of services,” Egan-Robertson said.

The Ford or Chevy debate extends to feeding

Looking to the future of greener milk
By Abby Bauer, Senior Associate Editor