He checks for heats morning, noon, and night 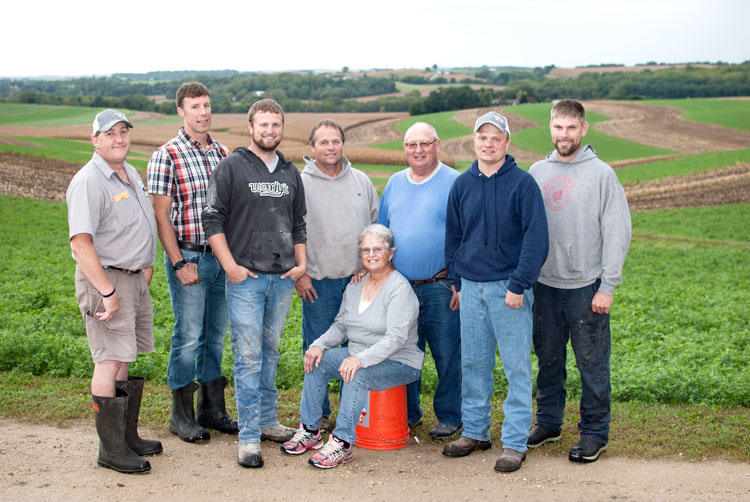 “I walk the pens three times a day — after morning chores, noon, and after night chores. Usually during those calm times of the day, I can catch most of the active cows,” said Jeffrey McNeely, a Platinum winner of the Dairy Cattle Reproduction Council’s (DCRC) 11th annual awards competition. “Every Monday, I print off the 21-day interval list for the middle of the week and those cows are tail painted . . . that list is always in my pocket,” said the Brooklyn, Wis., dairyman who operates Rollin’ Green Dairy Farm with his brother Jamison; father, Jim; and grandfather, Bob.

“We rotate colors of tail paint every week. It is much easier to narrow the heat detection down to a smaller group of 21-day interval cows. There is really no heat detection done on the fresh cows until after they have been serviced once off of the double ovsynch protocol,” said McNeely, whose farm has previously won the DCRC awards competition. “The conception rate is actually higher with the timed A.I. than it is with natural heats; 58 percent for double ovsynch and 52 percent for standing heat.”

All six of this year’s Platinum winners of the Dairy Cattle Reproduction Council’s awards share additional insight in this Hoard’s Dairyman Intel as well as the Round Table found on pages 679 to 682 of the November issue of Hoard’s Dairyman. This year’s competition drew the second-largest set of nominations to date — 102 — from 15 U.S. states and seven countries found on four continents.

Here are additional responses to the question, “How are cows observed for heats?”

Holmesville Dairy, Argyle, Wis.: Our Genex technicians walk through the pens every day while cows are locked in headlocks. We use Genex Reveal tail paint to check to see who is in heat. If tail paint is gone, then the breeder will breed that cow. The heifers are bred at outside headlocks and walked daily. Estrotect patches are used for heat detection in the virgin heifers.

Conception rates in cows for presynch ovsynch run near 62 percent; cherry-picked second prostaglandin is 52 percent; ovsynch after herd check, 46 percent; standing heat, 51 percent; and chalk, 57 percent. That averages out to an overall conception rate of 56 percent.

Pendora Dairy, Monkton, Ontario, Canada: We run AfiMilk automation in our milk parlor, and cow activity is read three times a day. Cows that were set up through the prostaglandin protocol only get bred on their activity.

Schilling Farms, Darlington, Wis.: Cows are tail painted with Genex Reveal paint and “walked” every day by the Genex team. Nonlactating heifers have Estrotect patches applied prebreeding and then are painted when confirmed pregnant. The heifers are also “walked” while restrained in headlocks once per day.

Cows are watched for heats as soon as they are 25 days in milk (DIM). However, cows are not bred based off heat detection until the end of the 75-day voluntary waiting period (VWP).

Conception rates for the year, all services:

Seidl’s Mountain View Dairy, Luxemburg, Wis.: All cows go on a presynch program. Cows that show heat after 60 days are bred on standing heats. Only cows given the third prostaglandin on a Monday are tail painted; color changes weekly for timed A.I. Pens are walked a few times a day to observe for heats.

Victory Farms, Milbank, S.D.: Cows are observed for activity based on tail chalk. We chalk tails every day. Every breeding gets a code. Codes are double ovsynch, CIDRs (progesterone insert), CIDR early, GnRH, and chalk. Then we are able to see conceptions on all codes. Double ovsynchs run the highest on our dairy.