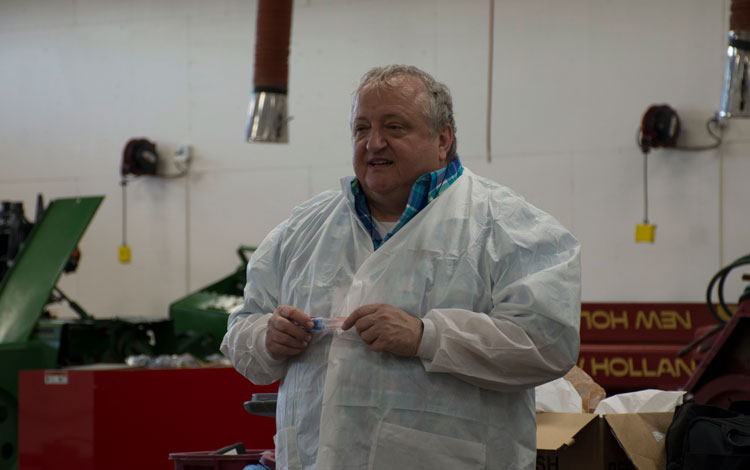 Not all types of salmonella behave the same. That was one of the main points made by Donald Sockett, D.V.M., during his presentation at the Calf Care Connection workshop hosted by the Professional Dairy Producers of Wisconsin (PDPW) last week.

For that reason, Sockett emphasized the importance of sampling sick animals to identify the serotype of salmonella you are dealing with. A sample submission to the Wisconsin Veterinary Diagnostic Laboratory where Sockett works is what led to the identification of a new strain of salmonella that is killing calves at an alarming rate.

“Heidelberg is the worst we’ve seen so far,” Sockett said of the salmonella strain that first appeared on the radar in 2015. Farms affected by Salmonella Heidelberg experience death losses of 25 to 60 percent in their calves, and most die within four to eight hours of showing clinical signs. “I’ve never seen a salmonella kill calves this fast,” he said.

There are eight strains of Heidelberg, but only one strain is deadly. Again, that is why Sockett highlighted the need to identify the serotype and subtype of salmonella affecting the herd. “Every dairy has salmonella,” he explained, “but you need to know if you have a deadly strain or not.”

A human health risk, too
Besides Heidelberg, Sockett shared that the other most dangerous types of salmonella for cattle are Newport, Dublin, Panama, and Schwarzengrund. He said that salmonella vaccination is a tool to reduce the severity of clinical disease, but it does not provide protection from infection or prevent fecal shedding.

Salmonella is not only a problem for cattle. It is a zoonotic disease, so humans are susceptible as well. An estimated 1.2 million salmonella cases occur in people each year. Most of these cases are contracted through contaminated food; only 11 percent can be traced back to direct contact with animals.

For Salmonella Heidelberg, the numbers are strikingly different. Two-thirds (66 percent) of the 56 human cases reported were in people who had direct contact with dairy beef calves. Seventeen of those people had to be hospitalized. Sockett called Heidelberg the most zoonotic salmonella recorded in the United States.

You can read more about the Salmonella Heidelberg outbreak in the article “A scary new strain of salmonella.”

Lessons learned on the grocery side
By Abby Bauer, Associate Editor