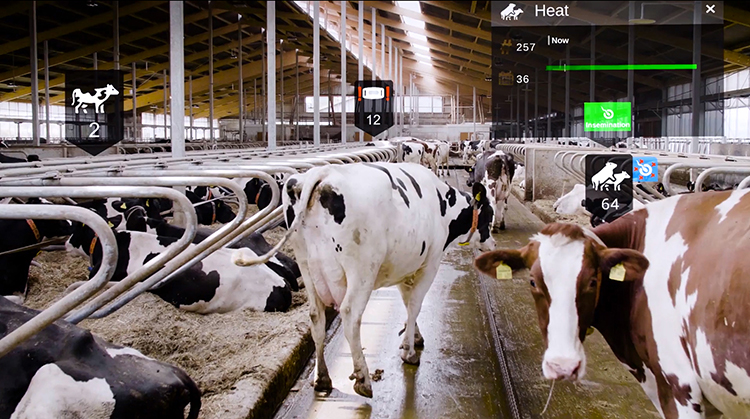 Each year’s visit to World Dairy Expo in Madison, Wis., always seems to have at least one new technology surprise that jumps out from the rest.

My big “Wow!” at Expo last month was a video look at “augmented reality” (AR) technology being developed that marries cow identification sensors, fast computers, data records interfaces, heads-up display glasses, and virtual reality. AR was originally developed by the U.S. Air Force in the early 1990s and is now being rapidly applied to everything from classrooms to construction sites and, yes, video games.

The dairy application I saw is a video game-esque pen walk like you’ve never imagined. As seen in the photo above while in Heat Status mode, the view through the glasses shows cow information icons as you approach animals. I was shown actual video footage of such a pen walk, not an animation, because the glasses can record what the wearer sees.

With the glasses on, a person walking through the barn sees a row of menu button icons overlaid across the top of their field of view. Focusing on one of them becomes a virtual reality command to open it, which brings up a list of tasks that the wearer chooses from by using their finger. The system also responds to voice commands.

One task choice might be to show the location of a specific cow. Another might be to show cows that, according to activity monitors, milk sensors, and herd records, are probably in heat. What the wearer sees in the glasses as they approach such an animal is its number and a small icon of a bull mounting a cow.

Looking from side to side in the barn shows I.D. numbers and ready-to-breed icons for other cows. Cows with a health alert of any kind are always identified in the glasses with a red triangle icon, no matter which menu task selection is being used at the time.

The Dutch company developing the system says it is two to four years away from market, because “dairy proofing” the glasses against dust and moisture is extremely challenging. But the way times flies, isn’t a few years just around the corner?