Compared to last year, custom rates rose 1.9 percent. Just one year earlier, the same rates were down slightly. Of the 82 rates reported in the year-to-year comparisons, 52 rose, 24 fell, and 6 remained virtually unchanged.

Because of the potential variation in size and overall productivity of equipment, a range was reported by Pennsylvania NASS specialists. Those ranges are shown in the table. The range represents the middle 80 percent of all reported rates for each job. That means the lowest and highest 10 percent of all reported values were excluded. Differences in rates also occur due to terrain, soil, and competition for services.

The reported rates are based on voluntary reports by custom operators and farmers throughout Pennsylvania. When looking at the table, be sure to look at the column "Basis of charge." Most of the rates are per acre, hundredweight, ton, bale, or bushel rather than per hour to reduce variation due to machinery size. The rates include the cost of hiring the machine with fuel and operator and exclude the cost of seed, fertilizer, and other materials used unless specified.

We only included rates more specific to the dairy industry. A complete report can be found by going to www.nass.usda.gov/Statistics_by_State/Pennsylvania/Publications/Machinery_Custom_Rates/index.asp 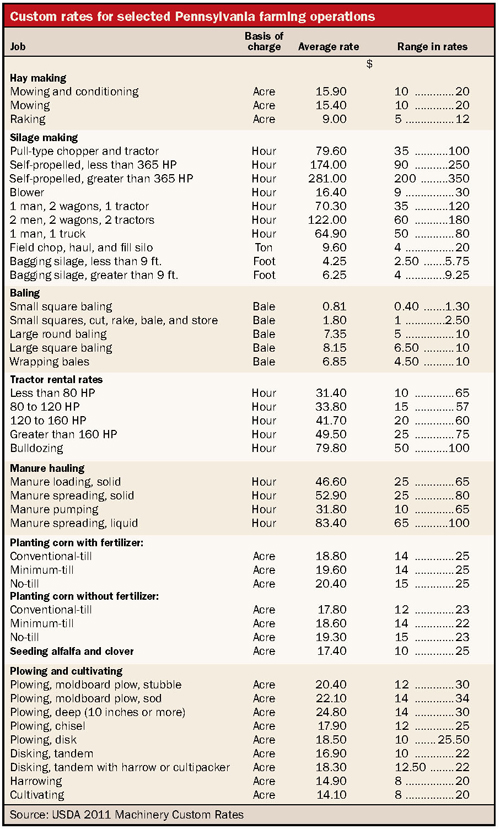 Click here to return to the Crops & Forages E-Sources

This could be a banner crop year
Hoard's Dairyman Intel

Less hardwood in your forage
By Hoard's Dairyman staff