Dairy producers, regardless of size, must examine how the Dairy Margin Coverage program fits into their overall risk management plan.

By Scott Brown, University of Missouri
The Agriculture Improvement Act of 2018 . . . known to many as the 2018 Farm Bill . . . has significantly changed the Margin Protection Program for Dairy (MPP-Dairy) that was introduced in the 2014 Farm Bill. The MPP-Dairy represented a significant departure from previous dairy safety net provisions and was received less than favorably by dairy producers. Not only did it provide few payments during its lifetime, dairy farmers often cited that premiums were too large relative to expected MPP-Dairy payments.

Definitely worth another look

Dairy producers are going to want to look carefully at the new program, now called Dairy Margin Coverage (DMC). For starters, it makes significant adjustments in both the level of margin support and premium costs. The DMC program should be studied and considered by producers, regardless of size. Many producers may find the new program provides safety net options that they will want to take advantage of in their farm’s total risk management strategy.

The calculated DMC margin remains unchanged relative to the previous MPP-Dairy margin and will continue to use the same milk and feed prices. It will be calculated monthly as passed in the Bipartisan Budget Act of 2018 (BBA18) instead of the bimonthly calculation used in the 2014 Farm Bill. 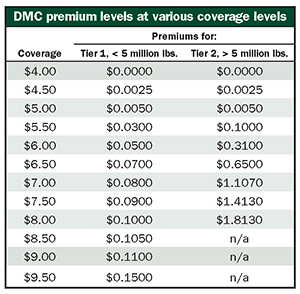 Expanded coverage. The DMC program offers three new higher levels of margin coverage on a producer’s first 5 million pounds of production history: $8.50, $9, and $9.50. These new higher-coverage options substantially raise the likelihood that a payment will be triggered if a producer selects these higher coverage levels. As a point of reference, the previous program capped coverage at $8 per hundredweight (cwt.).

The 2018 Farm Bill tier 1 premium has been reduced even further to 10 cents per cwt. at the $8 level. Even the new $9 coverage option has a tier 1 premium that is less than the premium offered for $8 coverage under the BBA18.

Receive a discount and a refund. Dairy producers that elect to commit to the same coverage level and percentage of production history covered for the five-year life of the 2018 Farm Bill will receive a 25 percent discount on their premium cost.

Dairy producers who paid MPP-Dairy premiums over the 2014 to 2017 period will be eligible to receive reimbursement of a portion of the premium cost in excess of the MPP-Dairy payments that they received. There are two options. They can elect to receive 75 percent of this calculated amount to use as an offset to their premium costs under the DMC program or receive 50 percent of the calculated amount in a cash reimbursement.

The graph shows DMC payments that could be received by dairy producers choosing the $9.50 coverage level. The range of DMC payments at this level is based on the stochastic baseline constructed in conjunction with the Food and Agricultural Policy Research Institute’s (FAPRI) long-term baseline process.

Given the potential for large DMC payments at higher coverage levels, dairy producers are going to need to think carefully about their election relative to other producers. From current data available, it is estimated that roughly 30 percent of current milk supplies can opt for the $9.50 coverage level at the tier 1 premium level. This could mean DMC payments may slow the response of milk production cuts in periods of low-market returns.

Other changes in the dairy provisions contained in the 2018 Farm Bill include:

Yet to be released, USDA regulations will provide necessary details regarding sign-up timing as well as other needed parameters. Expect sign-ups for the new coverage optionsto begin sometime in early 2019.

It appears the DMC program will provide a needed boost to the dairy safety net and builds on the new policy direction laid out in the MPP-Dairy. The combination of lower premium costs, added flexibility in production history covered, and higher margin protection levels results in a much more effective safety program than the dairy industry has had for some time.