They put their calves under a roof 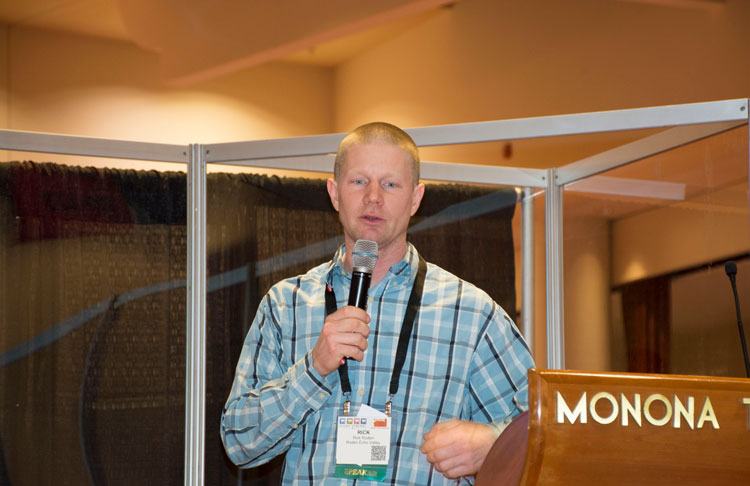 After raising calves in hutches outside for years, the Roden family decided to look into new calf housing options to accompany the growth of their dairy herd.

Rick Roden, who is a partner in Roden Echo Valley LLC with his father, talked about their calf housing during his presentation at the Dairy Business Association’s Dairy Strong Conference held in Madison, Wis.

While they debated between building one big building or several individual buildings for calves, they received the recommendation to build a structure that would house two weeks worth of calves. At that time, they were milking 400 cows and raising all heifer and bull calves, so they settled on six buildings that would hold 16 calves each. Since then, they have added two additional buildings as their herd grew to 650 milking cows.

Each building is 64 feet long and 20 feet wide. Calves are housed in individual plastic pens that are bedded with wheat straw. Under the pens is a layer of gravel. Each time they clean out pens, they take out an inch of gravel and add a new layer of gravel on top. “This is a cheap way of disinfecting the area,” Roden explained.

The curtain on the south wall is a shade cloth that can be manually moved up or down. It is raised in the summer to maximize ventilation. In the winter, it is closed to keep snow out, but it still lets the sunlight through. The north side of each building has a thicker curtain that is run on a thermostat.

A better way to wean
Roden said they use an all in, all out concept with the barns. “For years, we felt major stress in a calf’s life was caused by weaning and moving, and typically you do that all at the same time,” he said.

To avoid that stress, the Rodens designed these barns so they could be converted into group housing when the pens were removed. “Instead of weaning and moving them, we wean them and keep in the same building with the same group of calves for a transition period,” he explained.

Calves start weaning around 6 weeks of age. They are given one bottle of milk in the morning, along with access to free-choice water. At 7 weeks, they are fully weaned and the pens are converted to group housing. “It’s a more gradual process,” Roden said.

The buildings are all identical, so any of the pens, gates, and feeders can be moved to wherever they are needed. The family also made wash racks for the pens, so they are very easy to clean with a power washer, Roden said.

Roden commented that calf hutches are a very good housing option, but they have seen a few benefits since moving calves under a roof. For one, feeding is easier as people can move right down the row to deliver bottles or grain; there is no walking in between hutches. Also, even though the barns are still cold, feeders are out of the elements.

Compared to the hutches, Roden estimated that they are using about a third less straw for bedding now. “The calf is not out in the snow or rain anymore; it’s much drier inside the building,” he said.

Keeping calves out of the elements and drier has had a positive impact on their mortality rate, although Roden was quick to credit his mom for her phenomenal calf raising abilities and their already very low calf death loss. His mom and youngest sister do much of the calf feeding, and Roden feels that in addition to the drier surroundings, it helps to have the same person doing this task day in and day out.

Agriculture is not a partisan issue
Hoard's Dairyman Intel

Agriculture is not a partisan issue

Hoard's Dairyman Intel
Agriculture is not a partisan issue