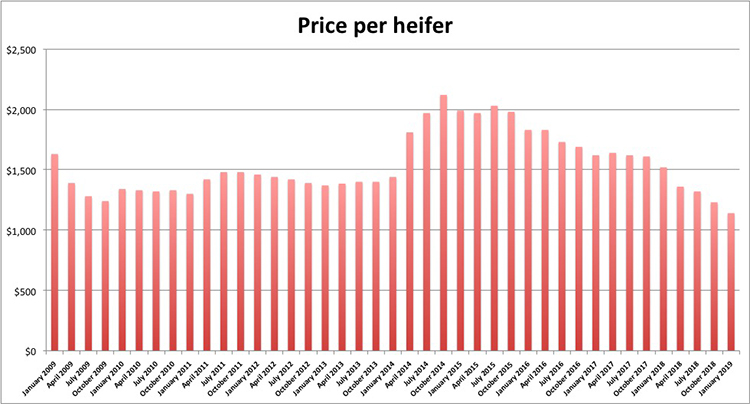 Having dropped by $380 per head in the past year, dairy replacement values tumbled to a decade low of $1,140 per animal. That’s a price in which very few producers can cover costs.

Not even during the deep dairy recession of 2009 did replacement values fall this far. Back in those days, replacement prices bottomed out at $1,240. When adjusting for inflation, that price point is really $1,420.

There is no doubt that the dismal dairy economy has directly contributed to this situation. With milk prices not covering the cost of production, dairy farmers don’t need anymore mouths to feed.

In fact, negative returns caused some dairy farmers to step up culling throughout 2018, as 3.15 million dairy cows were sent to slaughter through late December. That was up 157,800 head over the previous year.

At the same time, some dairy replacements never enter the milking string and head straight to slaughter because there are no buyers.

The $1,140 figure quoted earlier is just the average, as prices ranged from Virginia’s $970 per head to Oregon’s $1,350, according to the most recent issue of USDA’s Agricultural Prices.

Here are the prices in other major dairy states:

Agriculture is not a partisan issue
Hoard's Dairyman Intel

Agriculture is not a partisan issue