Dairy farmers — help is on the way 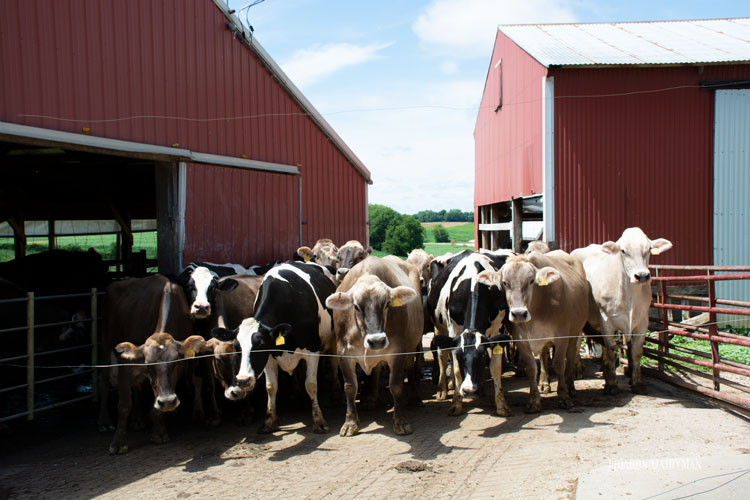 “If they can hold on, help is on the way thanks to the farm bill,” USDA Secretary Sonny Perdue firmly stated to the House Committee on Agriculture.

That statement came after a number of opening questions from Collin Peterson (D-Minn.), Chairman of the House Committee on Agriculture, in a meeting that lasted over four hours.

The “they” referenced by Perdue?

Dairy received immediate attention
“When it comes to the farm bill, the main thing that I have been focusing on is the dairy provisions,” said Peterson during the House Committee on Agriculture meeting regarding the rural economy. “I am very proud of what we’re able to do in the farm bill for dairy and to thank the former chairman (Mike Conaway, R-Texas) for his help with that, along with the other committee members,” Peterson continued on Wednesday, February 27.

“What I am concerned about is dairy people who were so soured by the old program (Margin Protection Program for Dairy or MPP-Dairy) that it’s difficult to get them to look at the new program (Dairy Margin Coverage),” the Chairman of the House Committee on Agriculture said to USDA Secretary Sonny Perdue.

Dire times for dairy
“We have a couple dairy farmers in our part of the world going out of business every week or every month,” said a very concerned Peterson, who has long served in the House of Representatives representing Minnesota. “What I am worried about is that we get the message out to these people (dairy farmers). This is a different world that we are facing with these new provisions in the farm bill.

“I have had some people tell me that the safety net that we put in there is actually too good because you are going to have $9.50 (per hundredweight) above feed costs, which is $17.50 milk. You can get that coverage at a pretty reasonable price,” he said, eluding to the fact that the new Dairy Margin Coverage (DMC) program’s implementation has been delayed.

Message to farmers
“If you are thinking about pulling the plug (on your business), give us a couple months so we can roll out this program (DMC) before you make a decision (on your business),” pleaded Peterson, recalling conversations that he has had with dairy farmers.

“If you look at what’s in this (farm) bill, that will change your mind,” he continued.

“I actually think the future for dairy is pretty good given this new safety net,” said Peterson redirecting the conversation toward USDA Secretary Perdue, who attended the House Committee on Agriculture meeting. “So, whatever the department (USDA) can do to help us with that message (will be important).

“As I understand it, it will be early summer before you get those regulations written,” Peterson said, asking for clarification. “But they (the provisions) will be retroactive, as I understand it, to the first of the year (January 1, 2019).

Take a close look before selling out
“That information details what you (a dairy farmer) would have gotten last year had the program been in effect in 2018,” he said. “If you (a dairy farmer) have 5 million pounds of milk and you signed up for the whole thing (DMC) at $9.50 per hundredweight, it would have cost you about $5,000 to get almost $100,000 worth of benefit had the program been in place last year,” said Peterson.

“So, I just hope that we can all talk to our dairy farmers and make sure that they factor that in before they go off and make a decision that is going to be irreversible,” said an extremely sincere Peterson in discussing the fact that many dairy farmers are at the end of their financial ropes. “When we lose these dairy folks, it’s hard to replace the expertise.”

USDA agrees
“You stated the obvious . . . we know it’s tough out there,” Secretary Perdue said to Peterson and the entire House Committee on Agriculture. “You mentioned one sector that has certainly been under more duress than most any . . . and that’s the dairy industry,” said Perdue.

“If they can hold on, help is on the way thanks to the farm bill,” he firmly stated.

“Your implementation of dairy . . . you are hoping to get that done by June?” asked Peterson, seeking more definitive clarification from the USDA Secretary.

“Let me give you the dates on the Dairy Margin,” said Perdue, looking through papers for specifics.

“We make these predictions, but we are not totally in control. As you know, it goes through an OBM (Office of Budget Management) process,” the USDA Secretary reminded the congressman.

“The interesting thing on the net refund provision on prior premiums (for MPP-Dairy in the 2014 Farm Bill), we think we can get that done by the end of April,” said Perdue.

“We think that the calculator, so that farmers can calculate options, will be ready by the middle of April,” Perdue went on to say about the new DMC program in the newly approved farm bill. “We think on July 8 that they (dairy farmers) can begin the retroactive payments up to then (January to June 2019 coverage).”

Paper slows process
“One of the challenges we have had calculating it (the refund provision) . . . in the effort for the 2014 Farm Bill . . . in order to get people served quickly . . . they (FSA offices) used paper recording on many of the components. So it’s not electronic,” Perdue shared.

“It’s much more laborious to go back on the first two years and calculate who had payments, who didn’t, and whether the farms have been converted (transferred) or whether they are still in business,” said Perdue. “There is a lot of manual administrative work that has to be done on those first two years. I think we could achieve even faster results if we didn’t have that provision (premium refunds).”

For more information
The entire House Agriculture Committee discussion can be found at this link. The discussion on this topic appears at roughly the 40-minute mark of what was a 4-1/2 hour meeting.