Their lives changed in an instant

“Hope is being able to see that there is light despite all the darkness.” — Desmond Tutu 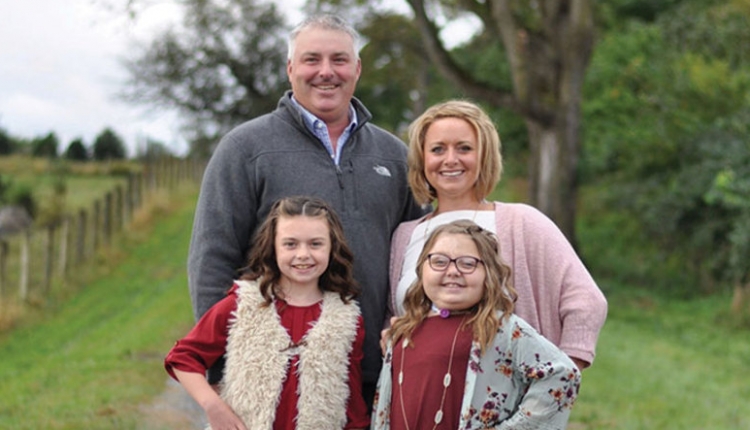 Today, at home in Mercersburg, pa., the Burdette family still faces challenges. On those days, it’s Reese (front right) and her sister, Brinkley (front left), who bring the light and a positive spirit that is contagious to their parents Justin and Claire.
Light at the end of the tunnel.” “This too shall pass.” “Keep your head up.” “Hang in there.”

These are common phrases in the current dairy climate. However, staying positive is becoming increasingly challenging. For one Pennsylvania dairy family, focusing on hope has helped them through the darkest days of their lives.

On Memorial Day 2014, Reese Burdette and her grandmother, Patricia Stiles, were victims of an overnight house fire. Reese and her sister, Brinkley, had been visiting their grandparents in Virginia for the long weekend.

When Reese’s mom, Claire, received the first phone call at 2:30 a.m. after the fire, she didn’t realize the severity of the situation. Claire’s husband, Justin, scrambled to find milking help, and they headed south from their Mercersburg, Pa., home.

What followed was a story that became well-known to many in dairy circles around the world. Reese, who was 7 years old at the time, spent the next 662 days in the Pediatric Intensive Care Unit (PICU) at Johns Hopkins in Baltimore, Md. Patricia, who had gone through the fire to save Reese, spent two months recovering from her burns at MedStar Washington Hospital in Washington, D.C.

“That was the start of a very long two years,” Claire said about that night. “Our lives would forever be changed, and I didn’t even know it at that moment.”

After being on the road about 40 minutes, Claire got a call from her sister. “I remember hearing that Reese needed to be airlifted, and they wouldn’t do it until I got there,” she said. “At that moment, I knew things were bad.”

According to Claire, the morning seemed to drag on, yet it flew by at the same time. Once Reese was airlifted to Baltimore, Md., she stayed in Winchester, Md., long enough to calm Brinkley and pray with Patricia before she was airlifted to Washington, D.C.

“Our family was so distraught that Reese and Mom would not only be at different hospitals but different cities,” she said. “But in the end, it is what was best for both patients . . . just hard on our family.”

Within hours, social media spread the word about the fire and the prayers poured in. In the first days afterward, Reese appeared to be doing well while Patricia struggled to live.

“I remember the guilt of having a daughter who was rallying while my mom’s diagnosis was very dim,” Claire said of not being able to be in two places at once. “For one week, Reese rallied and Mom fought to stay alive.”

Then the situation reversed. One week to the day of the accident, Reese went into her first cardiac arrest. She was kept in a medically induced coma for more than four months to help her try and heal from the burns covering 35 percent of her body.

In the days, weeks, months, and year that followed, Reese had six cardiac arrests, over 500 blood transfusions, more than 50 surgeries, and four blood infections. She spent 605 days on ECMO (extracorporeal membrane oxygenation), an advanced life support technique that provided long-term breathing and heart support so Reese’s lungs could heal.

Three times the family was called in because they thought Reese would not make it.

In the early days, neither Justin nor Claire left Baltimore, often staying at the hospital for more than 24 hours a stretch. “I remember rounding the corner in the PICU and knowing what a long day it would be with the endless beeps of the machines, the flurry of hospital staff that constantly tended to Reese, and the mere sight of Reese listless and unconscious — it was unbearable, but we had to push through,” she said. “We made ourselves get up each morning, shower, get dressed, and face each day, and we did it together.”

A tremendous outpouring of love and support from close family and friends allowed them to stay in the city while chores and life went on at Windy-Knoll Holsteins in Pennsylvania and Waverly Farm in Virginia. “Without them, we wouldn’t have been able to cope,” Claire said.

Some days, the environment in the hospital felt very negative, and Claire said they had to push past it. Differing opinions from doctors and staff members, language barriers, and advanced medical procedures were a maze they had to navigate daily.

“A positive is that as dairy farmers, much of what we do with cows day-to-day with various treatments allowed us to better understand different medications used and the reasons behind those meds,” Claire said.

She added the family has always been Christian faith-based. “During those hospital days, we turned to God like never before and we know He was with us,” she said.

“There are so many signs we had, so many situations Reese pulled through and she shouldn’t have — and we know that God had a hand in so many cases,” Claire added.

That strong faith and their belief in forming relationships with staff, other patients, and their families, helped them break through barriers that popped up during Reese’s treatment. They made lifelong friends at the hospital, many who have come to support Reese after she returned home and healed enough to walk into a showring.

Despite living in a hospital room, they tried to make it as cheery as possible, decorating with purple (Reese’s favorite color) and bringing in pictures from home. Perhaps the most memorable day was when Reese was well enough to have a visit from her favorite cow, Pantene, at the hospital.

Justin navigated hospital staff and traffic in downtown Baltimore for the reunion. In spite of the traffic, lights, medical equipment, and more people than she had ever seen, Pantene never hesitated. Led by Justin, she walked right up to Reese, who touched her face and took her halter. The connection between the two was palpable. Photos of the two raced across the internet and newspapers as Reese continued to work toward going home.

During their time at Johns Hopkins, as Reese improved, the Burdette family worked extra hard to not only stay positive themselves, but create a positive environment for those around them. Visits from NFL players, tea parties with friends, and huge Halloween and birthday parties made the long days brighter.

“When Justin was having a really tough day, I was able to pull him up, and when I was really down and out, he supported me and lifted me up,” she said. “Luckily for us — Reese has one of the most positive attitudes of any kid or human being we know.”

Having a strong support system of friends and family helped make the long days tolerable. “Reese’s story seemed to stretch far and wide and for some reason touched so many people,” Claire said. “Our own dairy industry supported us like we’ve never seen before.”

Hospitals can be a scary place, whether it’s one day of treatment . . . or 662 days. The current dairy industry can feel the same to those trying to get through one day at a time.

“We lived in a very negative environment for 662 days — but we never let it get to us,” Claire said. “We stayed positive, and we surrounded ourselves with positive people. Just like today and the dairy industry, there will always be tough times, but we have to be strong and push through.”