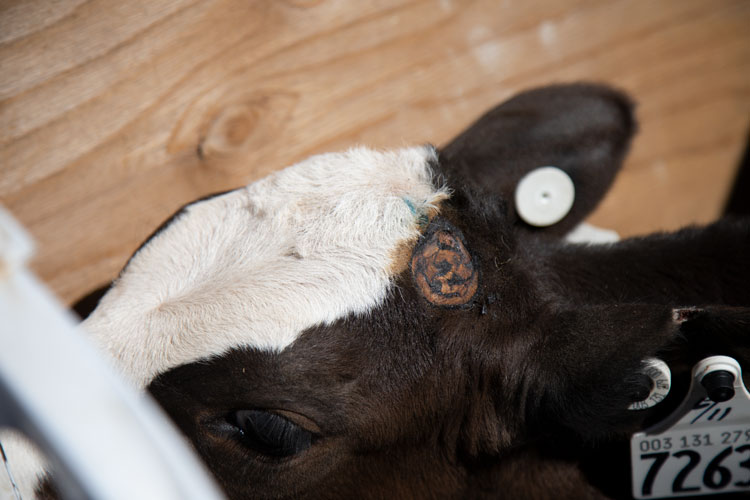 Disbudding or dehorning are very common practices in the U.S. dairy industry, for the safety of both animals and humans. Pain control when removing horns is not used nearly as frequently, but it really should be.

In the U.S., disbudding is most commonly done with hot-iron cautery, which prevents further growth from the horn bud with a thermal burn. Van Os has noticed growing popularity in using caustic paste, which destroys the bud with a chemical burn instead. Either way, disbudding should be done prior to 8 weeks of age, before the horn attaches to the skull.

It still hurts
While calves may exhibit fewer signs of pain when caustic paste is used compared to burning, Van Os said that doesn’t mean it is not painful. For that reason, pain control should be used with either method of disbudding. This practice is required in Canada and Europe, but Van Os pointed out that according to USDA data, just one third of U.S. dairy farms use pain relief with disbudding.

“The best practice to manage pain is to combine a local anesthetic (such as lidocaine) with a nonsteroidal anti-inflammatory drug (such as meloxicam),” said Van Os.

She also shared that there are some unanswered questions about the best age to disbud. A general recommendation is that earlier is better, and we know prior to 8 weeks is better than after 8 weeks. However, there isn’t data to show that 1 week is superior than 3 weeks of age, for example.

Van Os noted that younger calves are easier to handle, struggle less, and if using paste, are less likely to wipe it off. However, just because they are not expressing as much discomfort at a younger age does not mean they aren’t feeling pain, she explained. “The best practice is to still use a combination of lidocaine and meloxicam,” she said.

In the end, Van Os said pain control is a win-win for farmers. It benefits the calves, and it improves the general public’s feelings toward disbudding. “Consumers value that animals do not feel pain,” she said.

Is there a place for FMMO modernization?
By Abby Bauer, Senior Associate Editor