Food and fellowship can bring people together. However, the conversations about food production and farming practices can drive the same people apart.

By Andrea Stoltzfus
The author and her family own and operate a 570-cow Holstein and Jersey dairy near Berlin, Pa 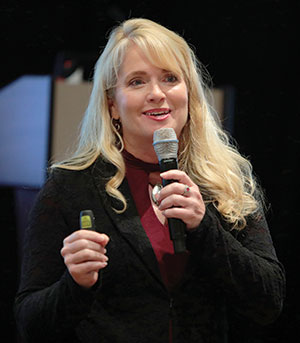 With a deep agricultural footing, Michele Payn easily relates to farmers and has been helping them relate to modern-day as well as future consumers.
Host any type of social event, and the combination of food and fellowship typically brings people together, whether it be in the kitchen, around the table, or at a picnic. Unfortunately, conversations about food production and farming practices can drive the same people apart.

Michele Payn is determined to redirect that scenario and stop the “food fights.” From her start on a Michigan dairy farm to successful careers throughout the agriculture industry, she has seen a shift taking place. The further the average consumer gets from the farm, the more likely there’s a disconnect.

Her love for Holstein cattle led her to purchase her first heifer as a 9-year-old. That heifer, along with a later purchase of a heifer named Perfect, resulted in progeny that helped Michele pay her way through Michigan State University, where she graduated with degrees in animal science and agricultural communications.

It was during her time at Michigan State University (MSU) that Michele saw firsthand the separation between the food and farm. A radical animal rights group tried to burn down the Animal Science building. That building housed the reproductive physiology laboratory, where Michele worked as a student. Just a few years later, while at her first job at World Wide Sires in California, another group tried to blow up another building on the MSU campus.

“That certainly opened my eyes,” she said of the issues faced by agriculture. “Then, when I worked for the National FFA Foundation, I found a commonality among all sizes and shapes of agricultural businesses — people didn’t understand the science or source behind their food.”

Michele’s response was to found Cause Matters Corp. in 2001 to build connections between the farm gate and the food gate. As a professional speaker, with firsthand knowledge of the farm life, Michele has worked with small groups, large corporations, consumers, dietitians, and farmers alike.

“My speaking work has focused on first helping farmers and others in agriculture understand the disconnect between food and farm, and then training them to bridge the gap,” she said. “Through the years, that’s evolved into connecting people around the food plate. I am called to bring truth to the conversation around food and farming.”

She emphasizes that the conversations shouldn’t be about getting defensive or complaining because 98.5 percent of the population doesn’t live on a farm or ranch.

“They have a right to ask questions about their food,” she said. “I know you’re tired, managing ornery cows, and would prefer to be dealing with your farm, but consumers will eventually decide how we get to farm.”

Michele’s early passion for dairy farming propelled her in the direction of dairy genetics, but she found it limited her own opportunities.

“As a result, I always advise young people to dream broad and not restrict themselves,” she said. “The dairy business has great opportunities, as does agriculture and the food business. I have been fortunate that my career milestones gave me many lessons I can apply to my own business.”

In addition to speaking and writing, she personally engages through social media. “I believe farmers have a responsibility to share images and messages that bring context to why we do what we do with our animals,” she added. “Some studies show that 75 percent of people haven’t been on a farm or ranch in five years. They will get their answers someplace; my intention is that it’s from those with firsthand farming expertise.”

As her business has grown, she has expanded from speaking engagements to social media strategy to authoring three books. The first, No More Food Fights!, was released in 2013, a direct result of Michele’s blogging and people she met in social media.

“It was hard for me to believe that people would buy a book that I wrote,” she said. She used a unique approach — making it a two-sided book, with one side featuring the farm angle, the other featuring the food angle.

Working with a mainstream publisher, she wrote Food Truths from Farm to Table, which came out in 2017. “The book features the 25 biggest issues across the grocery store — antibiotics, hormones, animal welfare, genetically modified organisms (GMOs), chemicals, and sustainability. The book also shares stories from 55 different farmers, dietitians, veterinarians, doctors, and others,” she said. 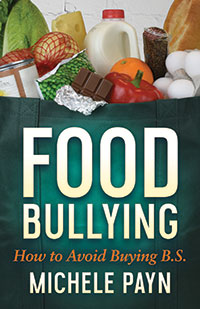 The third book, Food Bullying, will be released in early November. “The book focuses on how we’ve been manipulated around our eating choices, shedding light on some of the psychology used in the $5.75 trillion food business,” she said. “I was dumbfounded with the food bullying stories people shared, and I am excited to see how people will use Food Bullying to overcome bullying to protect their food and farming choices.”

Currently living in Indiana with her family, Michele looks out her office window and sees heifers that are descendants of her first “Perfect” Holstein. The Paynacres prefix lives on through her cow-loving daughter’s 4-H show career.

“Those special moments of watching her with her cattle make all the work worth it,” she said. “I believe we all have a legacy to leave behind in the dairy business, so I’ve also been an FFA volunteer, 4-H dairy leader, and judging coach for more than 20 years.”

Helping youth and their parents, as well as working with farmers around the world, has helped her learn more about current and future consumers. She uses her farm experiences, research, and parenting experiences to relate to her audiences.

“I have ranted about the milk market, praised the lessons learned at a cow’s flank, shared sweet pictures of dairy cattle, and discussed ugly practices . . . in the interest of bringing context to the dairy business,” she said. “Practices such as dehorning and castrating can sound horrible to the average person if we don’t explain why we do what we do,” Michele said. “These stories translate the science behind food and appeal to emotions while helping humanize farmers. Stories also open the door to more conversation.”

“Some of the challenges I’ve faced are apathy, activists, and access, but I think it’s important to help the people of agriculture,” Michele said.

“In both speaking and writing, I share stories that portray the compassion dairy people have for their cows, the work ethic of our business, and bringing laughter around some of the crazy things cattle do,” continued Michele.

Heifers, and at times dry cows, are housed on their small farm. Milking cows isn’t feasible with Michele’s travel schedule and she is thankful for neighbors who milk. Juggling family, business, cattle, and everything else would not be possible without an incredible team of family, friends, and neighbors, she said. Her husband, Erik, a “city slicker,” steps in to help when needed, and her two stepdaughters have become dairy ambassadors at fairs.

“The juggling act has helped me learn to prioritize family, swallow my pride and ask for help, use my calendar religiously, take care of myself, and find grace when needed,” she said.

“Life is full, but I am blessed. I am driven to help people understand the who, what, and why behind their food. It’s the best way I can return the lessons taught to me in the dairy business.”

To learn more about Michele Payn and Cause Matters Corp., visit her website, www.causematters.com, or look her up on Facebook.
Related