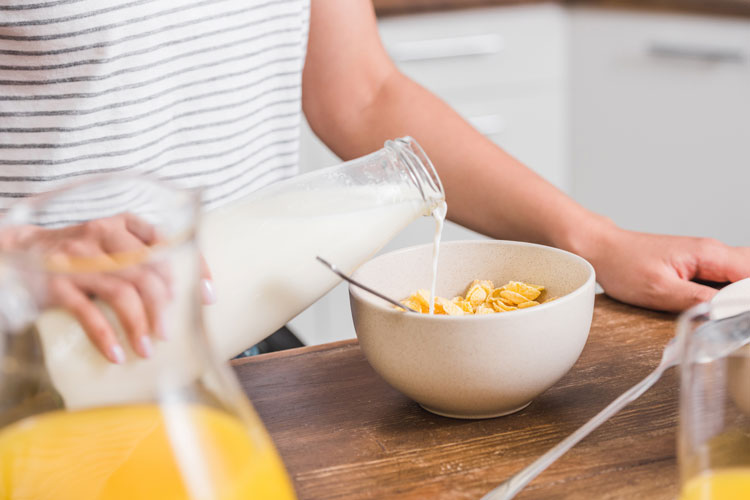 When it comes to the breakfast table, beverage milk and breakfast cereal have been long hitched together as complementary food items — when you have cold cereal, consumers complement the meal by pouring milk into the bowl before eating breakfast.

That once routine action has been fading from the daily routine in American households. That’s because in this "grab-and-go" world, both milk and breakfast cereal are being left in the house, or even worse, on the supermarket shelves, in favor of more easily carried choices.

Sales down 5 percent in six months
The Kellogg Company is among the breakfast cereal companies that have been hit especially hard. Maker of Raisin Bran, Special K, and Frosted Flakes, the company’s sales have been off 5 percent for the first six months of this year, reported The Wall Street Journal in the article “Facing a crunch, cereal companies press for revival.” The Kellogg Company is among the leading companies making breakfast cereal.

Another market leader, General Mills, has posted three years of flat sales at $2.3 billion annually. “There’s a lot more competition for breakfast than there ever has been,” General Mills’ chief executive, Jeff Harmening, told the The Wall Street Journal in an August 21, 2019, article. Overall, U.S. consumers collectively purchased $8.49 billion of cold cereal last year, according to market-research firm IRI. Those sales were down 6 percent over the past five years even as the U.S. population continued to grow.

Meanwhile, IBISWorld estimates that the combined cold and hot cereal category totaled roughly $10.6 billion in 2016. Compared to 2009, the category was down 17 percent from $12.7 billion in sales. That’s according to the Los Angeles Times article “Why Americans are eating less cold cereal for breakfast.”

Turning the tables
With flat sales, cereal makers must demonstrate a plan to bolster sales or grocery stores may allocate that shelf space to other products. Lost shelf space could begin another sales spiral for breakfast cereal.

Kellogg plans to develop a cereal brand focused on gut health and will add new flavors to some of its anchor brands to attract younger consumers. Meanwhile, General Mills believes demographics could begin working in its favor, as adults aged 55 and over and the growing number of children in America may bolster demand.

Time will tell if this strategy will work for makers of breakfast cereal. However, the trend line for fluid milk sales has been down, down, and down.

Milk also follows the cereal trend
"Milk prices are top of mind for dairy producers,” said Marilyn Hershey, a Pennsylvania dairy woman who is chair of the Dairy Management Inc. board of directors. “In the same breath, dairy farmers want to see innovation,” she stated at last year’s annual gathering of the National Dairy Promotion and Research Board and the United Dairy Industry Association.

“We are way past the crisis point on fluid milk,” said Tom Gallagher, CEO of the National Dairy Board and United Dairy Industry Association. “We don’t need any more studies, we need action."