By Andrea Haines
The author is a freelance writer based in Union Bridge, Md. 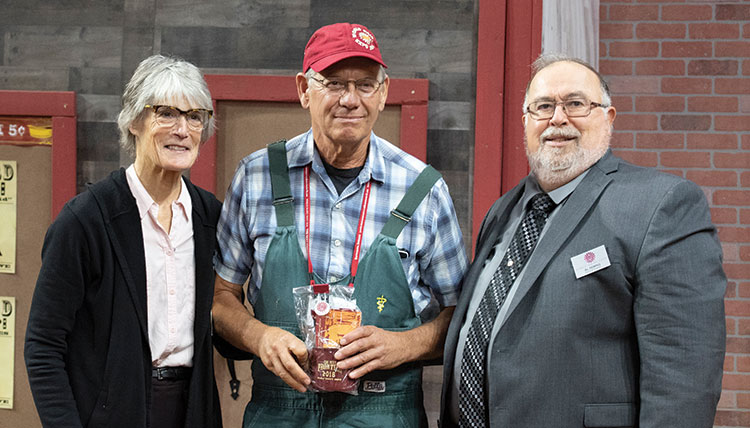 At the 2018 World Dairy expo, Rick Halvorson was recognized for his nearly 30 years of service as the veterinarian-on-call at World Dairy Expo. Fittingly, the award was presented by Shelia McGuirk (left) who has been a fellow volunteer for much of the same time and Al Deming, president of the Expo Board of Directors.

Overseeing the health and well-being of the highly valued animals of the world’s most famous dairy cattle show is a hefty task. Only three individuals have served as the head veterinarian on-call for the animals at World Dairy Expo since its inception: Lee Allenstein, Rick Halvorson, and Michael Miesen, all members tracing back to the Whitewater Veterinary Hospital in Whitewater, Wis.

In 2018, Halvorson passed on the reins to Miesen, a role that had been bestowed upon him by the original Expo veterinarian, Allenstein. “Dr. Lee was my mentor in practice in Whitewater, where I started veterinary medicine in 1978,” shared Halvorson. “In my early practice years, World Dairy Expo time meant that I got to work a bit extra at our practice, and do extra herd health work in Whitewater while he was away at the show.”

Halvorson eventually set foot on the Expo grounds to assist his mentor. “Dr. Lee wanted to continue with the Expo duties, but he wanted help so he could continue in that specific role. In 1993, I stayed in Madison the entire week to do the day and night duties,” he explained.

“The process of being the ‘official’ vet was a gradual one,” Halvorson said. He remembers eventually taking on a more prominent role at Expo after Allenstein wasn’t able to attend due to health reasons. “It was then I found myself as the ‘official’ vet for World Dairy Expo,” he shared.

The Whitewater Veterinary staff and World Dairy Expo assisted in the transition with flawless effort. A mentor to many, Allenstein started the practice in 1955 when he purchased the office. Known throughout the dairy industry as a veterinarian specializing in hoof health, a regular contributor to the Hoard’s Dairyman column Cowside Practice, and a professor of dairy medicine at the UW-Madison School of Veterinary Medicine, Allenstein left large shoes to fill.

Halvorson was raised on a dairy farm near Rugby, N.D. After high school, his pre-vet requirements were completed in two years and he was accepted into the veterinary school at Oklahoma State in Stillwater, Okla. “Four years later, in 1978, I was working at Whitewater Veterinary Hospital,” he said. “I stayed in that location for 40 years (retired in 2018), starting out in mixed practice but eventually concentrating on dairy.”

No time for rest

According to Halvorson, a typical day at Expo often includes an early morning call (4:30 a.m.). “You know that every call at Expo is an emergency,” he explained. “The cow must be ready to show on show day, so they can’t be sick and not eating if they are to look their best.”

He said, “Clients would call the hotel (before cellphones) with the night calls. Back then, the vet truck was your office, so notes were left on the pickup seat or clipboard.” The Expo veterinary staff now works from an “office” location nestled in the middle of the cow barns.

“Calls were answered as soon as possible,” he emphasized. “Rechecks were done on all cases as necessary.”

The seasoned vet explained further about the brisk pace, “First, you go to the animal (often a task in itself to find the barn location, especially in the older barn system) to make a diagnosis, go back to the truck to get the treatment, and return to the animal. Other clients would stop you along the way to request a supply item or ask a question about a case.” He kept a small notebook to jot down pertinent information about each case. He chuckled, “Before you knew, it was time for lunch or sometimes, supper!”

The Expo vet also works with the sale animals as they come to Expo with interstate paperwork. “Obviously, we didn’t know where they were going until after the sale,” he shared. “Each animal required an interstate paper with proper testing information recorded to go to its new home. This was a full-time job all by itself. Bonnie Wilson from our hospital did a superb job in preparing these documents.

“Showing dairy cattle is expensive, and the price goes up each year,” Halvorson added. “Exhibiting your finest animals is advertising, and you need to capitalize on that by selling some of those prized animals. That is hard to do, even for the seasoned dairyman.”

One of the major factors about show animal health he feels is pertinent is the feeding changes the animals go through. “The use of total mixed rations (TMR) on dairy farms is necessary for the best cow health,” he explained. “When you travel to a show, that process is difficult to continue, so there are feed changes that affect the cow’s rumen. It is this feed change that leads to health challenges for show animals.”

A case holding memory with the upbeat vet was one with a happy ending. “An exhibitor brought a Brown Swiss cow to the show that didn’t react well to the feed changes,” he shared. “The cow developed a frothy bloat that I couldn’t resolve with conventional treatment. When it abruptly fell over in the bedding pack, I had to quickly use my pocket knife to open its rumen on its left side. The cow did live, and came back to the show another year. The exhibitor and I laughed about it many times afterwards, but it was a bit tense in real life!”

Halvorson expressed that while this may be an animal business, it is the people that are the best part of Expo. “The exhibitors brought their best animals to the show, and it was rewarding to be trusted to try to help with medical issues. Most of the exhibitors came back every year, and became friends,” he smiled. “The same can be said for the other volunteers who made the show happen; it was wonderful to be part of a group working for the common goal of the show.” 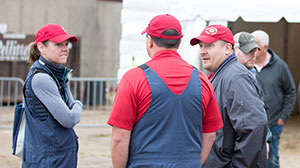 Learning from his mentor, Rick Halvorson, Michael Miesen (right) will serve as the lead veterinarian in 2019.
Miesen, also from the Whitewater Veterinary Hospital, has been working alongside Halvorson since graduating from veterinary school at UW-Madison. Smiling, he said, “If you ask me, I’d say 2017 was the ‘official’ start of the ‘head’ vet duties at Expo because that was the year Dr. Rick would call me the ‘boss.’”

Miesen grew up on a small family farm south of Platteville, Wis., and has been in large animal practice for over 12 years. “Tips I’ve learned from Dr. Rick include: smile, keep a positive attitude even when one feels bogged down for whatever reason, have fun, and don’t forget to stop and have a piece of pie once in a while,” he shared.

“Going forward, the most challenging task is to keep the trust exhibitors have shown to my two predecessors in taking care of their animals,” he said. “They both laid the groundwork to be well-respected ‘Expo vets,’ and I feel humbled to follow in their footsteps.”

As the show added larger barns and more space for animals, a few changes have been put into effect for veterinary care. “There used to be only one vet at Expo for many years, but Expo attracted more cattle, and we were able to offer more services on the Expo grounds,” Miesen said.

“We’ve been fortunate to work with three vets that were either residents or part-time clinicians at the vet school for the past few years,” he explained.

Miesen believes, “Being at Expo for eight days is probably the most fun and stressful week I have every year. It is time spent away from family (overnight stays) and from my responsibilities back at the practice. I would not be able to do it without their loving support and the partners’ efforts back in Whitewater.”

In your travels through the barns, wave a quick “hello” to the men and women in blue bib overalls, as they may be in route to an emergency. In that case, maybe also pass Miesen a piece of pie, too! 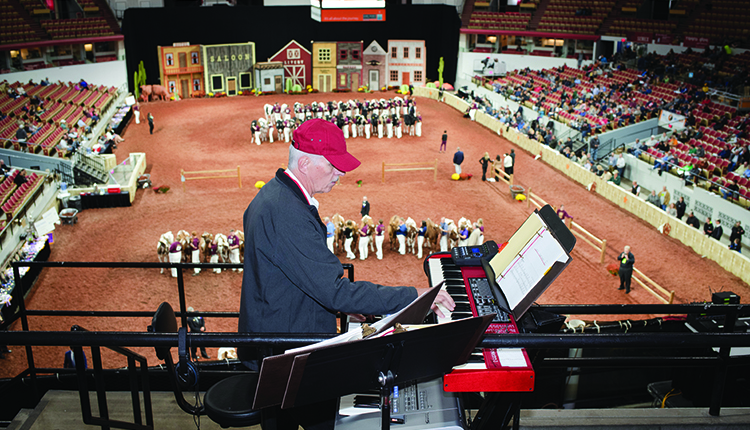 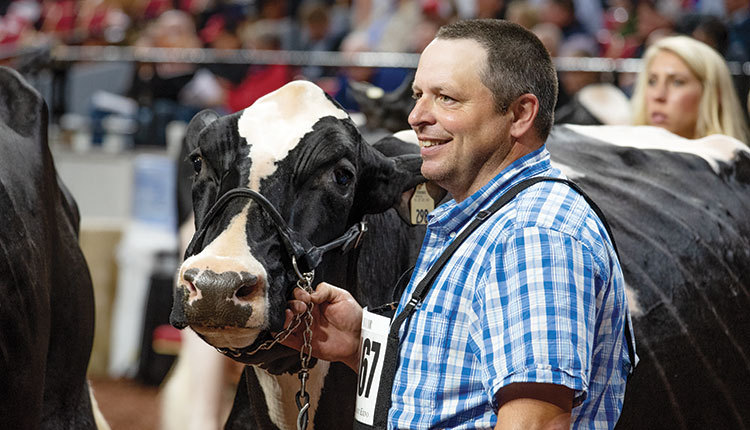 Hoards at Expo
Liddle did he know
comments powered by Disqus