By Karen Bohnert, Illinois dairy farmer
The author and her husband work in partnership with family on a 500-cow dairy in East Moline, Ill. 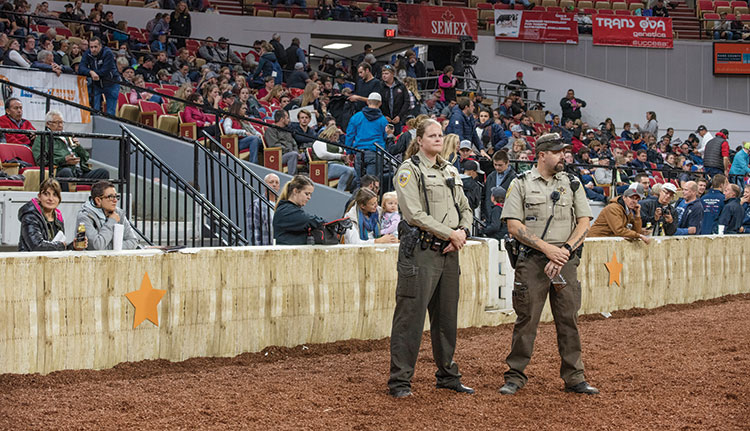 Throughout world dairy expo, you can find security details watching, waiting, and making sure everyone is safe.
Meeting security challenges in the post-9/11 era is no small task; it requires a complete approach that includes top-notch leadership, human resource management, strategic planning, and technological solutions. It also requires a strong relationship with law enforcement, and this is demonstrated during the first week in October when the dairy world reunites in Madison, Wis., at World Dairy Expo.

“With what we have seen at public events around the world and in this country, security is going to be a top focus at World Dairy Expo,” said Scott Bentley, general manager of World Dairy Expo. “We want both exhibitors and attendees to feel very comfortable coming to this must-attend, highly sought-after global dairy event. We do all that we can to make sure Expo is safe and welcoming.”

Dane County Deputies were assigned to secure the dairy show when World Dairy Expo began. Prior to 1994, it was the responsibility of the general manager of World Dairy Expo to coordinate the Dane County (Madison) deputies to perform traffic control and ground security during the show hours.

That’s when Anderson first encountered Expo. From 1974 to 1984, Anderson was assigned to work the Coliseum unit of the Sherriff’s office and was delegated to work a number of early World Dairy Expos.

In 1994, the main commercial exhibition space, previously called the Forum Building, was completely reimagined with the construction of the Exhibition Hall. While that construction ensued, Expo needed commercial exhibit space, so three large football field-long, soft-sided structures were put up in the north parking lot, adjacent to the old barns and across from the west lobby of the Coliseum.

Anderson stated, “An Expo board member at that time, asked Willis (Willy) Hartwig, a Dane County deputy, to hire some off-duty deputies to do overnight security on those tents during the week of the show.”

From 1995 to 1998, Hartwig continued to hire off-duty deputies for security, until he passed away from cancer in 1998. At that time, Anderson was hired to take over Hartwig’s place since he had worked so closely with him on scheduling of the security team. Today, the current security team consists of eight to 10 security personnel daily during the event.

“Security is a fluid concept,” stated Anderson. “We are always looking at the current social media and world opinions in an effort to keep pace with security needs. We must be flexible and ready to change our operating procedures, if needed.

World Dairy Expo draws a large, diverse crowd — locally, nationally, and internationally, so we plan to be alert and ready to act for whatever happens,” he continued.

It’s just part of our role

A global event such as World Dairy Expo attracts a large online following and a great deal of passion. This includes traditional dairy enthusiasts and those that may promote alternative ideas about the dairy industry and its future. Anderson and his team work hand in hand with show and facility management to ensure that demonstrators and outside solicitors are dealt with appropriately and efficiently.

In recent years, it seems that Expo has attracted a growing number of individuals and groups seeking attention for their “anti” causes. They are dealt with quickly and effectively to keep the spotlight on the priorities of the show. “It’s just part of our role,” explained Anderson.

While securing Expo is not a full-time job, it does take weeks ahead of the big event to organize, schedule, and prepare.

Anderson went on to explain that the crux of the challenge for security at World Dairy Expo is being flexible to understand the complexities and needs of all exhibitors and attendees. “Expo has policies and procedures to ensure that everyone is treated in a safe and secure manner,” he said. “The security team enforces that philosophy.”

Anderson concluded that he does not feel that the challenges to security have changed over the years, but that they have simply grown larger. “It breaks down to the fact that there are more exhibitors and attendees, making our scope of securing Expo bigger,” he concluded.

Thanks to the lead work by Anderson and his security team, World Dairy Expo opens their barn doors with a close eye on making sure it is a secure event for all to attend.

He’s the engine that put the Holstein show into motion
By Karen Bohnert, Illinois dairy farmer

Features
Around the Kitchen Table: November 2020
-
comments powered by Disqus