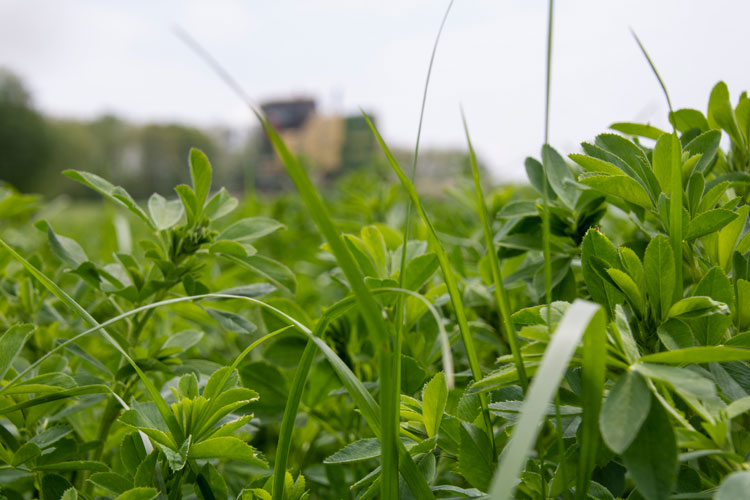 Alfalfa — does this forage qualify as one of the crops that’s eligible for the $14.5 billion in direct payments from the Market Facilitation Program announced earlier this year by USDA’s Sonny Perdue?

Yes — that’s the short answer for a pure stand of alfalfa.

Maybe — if that stand has 60 or more percent alfalfa.

No — if the stand has less than 60 percent alfalfa.

The final answer will be determined when each individual farmer completes the filing requirements at your local Farm Service Agency (FSA). That’s because the amount of alfalfa in the stand is critical to determine if the crop was indeed impacted by retaliatory tariffs due to the trade war. For farmers who plant alfalfa-grass mixes throughout the Midwest and northeast United States, the question has been critically important as of late, and until recently there has been some angst on the alfalfa topic.

The bigger picture
The potential payments for alfalfa come from a larger $14.5 billion package in the Market Facilitation Program. This program provides assistance for producers impacted by retaliatory tariffs and non-tariff barriers on exports of agricultural goods. On the farm level, payments can range from $15 to $150 per acre, depending on the crop. In all, nearly 30 crops are covered in the program with soybeans ranking first for financial assistance as China had been the leading importer of that crop.

“Recently, I signed up for the Market Facilitation Program. FSA rejected my hay acreage because of the way I listed my crop as ‘Alfalfa-grass mix’ instead of plain ‘Alfalfa hay.’ They are both basically the same crop. I contacted my head county FSA officer and he said, ‘The crop definitions came from Washington.’

“He also said, ‘Several other farmers had the same problem.’ Please let me know if this is true or whom else I should be talking to.”

Asked the Secretary himself
During the opening day of World Dairy Expo, USDA Secretary Perdue held a town hall meeting. We posed that question to the secretary as the second question of the day. Here is what he had to say:

“We can look into that,” said Perdue.

“We have to specifically enumerate the crops that are specifically eligible for market. I was not aware of an alfalfa-grass mix. I can understand where you draw a line as it can be pretty subjective if you have a whole alfalfa field that has been overrun with another type grass, ‘Is that an alfalfa mix or what?’” he went on to say.

“I think that is probably going to depend on the judgement of the local FSA committees. You can appeal to (local FSA committees) if you have been denied,” Perdue reminded the audience. “They know the lay of the land, know what the practices are.

“As for the Market Facilitation Program, we had to enumerate the specific crops that were eligible . . . and obviously alfalfa hay. I know alfalfa, I’m not sure I’ve seen other than an exhausted alfalfa field that’s been overtaken, I’m not sure that I knew that it was planted as a mix crop.

“Again, we can look at that,” he reassured the audience.

Here is the official ruling on alfalfa that will be shared with all FSA offices:

“Alfalfa-grass and/or legume mixtures are deemed ineligible for the 2019 MFP,” wrote a USDA spokesperson in Washington, D.C.

“Acreage reported as alfalfa (crop code 0027) is defined as a stand that contains 60 percent or more seeded to alfalfa, even if it is a mixture.

“Mixed forage acreage that has less than 60 percent alfalfa in the stand is not eligible to be reported as alfalfa, and is reported as an alfalfa-grass mixture.

“The U.S. Department of Agriculture expanded the scope of eligible commodities from the assistance provided in 2018 to include all of the farm bill commodity title-eligible commodities, in addition to several others that were directly affected by unjustified retaliatory tariffs like alfalfa,” concluded the USDA spokesperson.

Our take on the USDA response
If you have a stand of hay that’s 61 percent or more alfalfa, it should be reported as alfalfa to the local FSA office. At that point, it qualifies for payment.