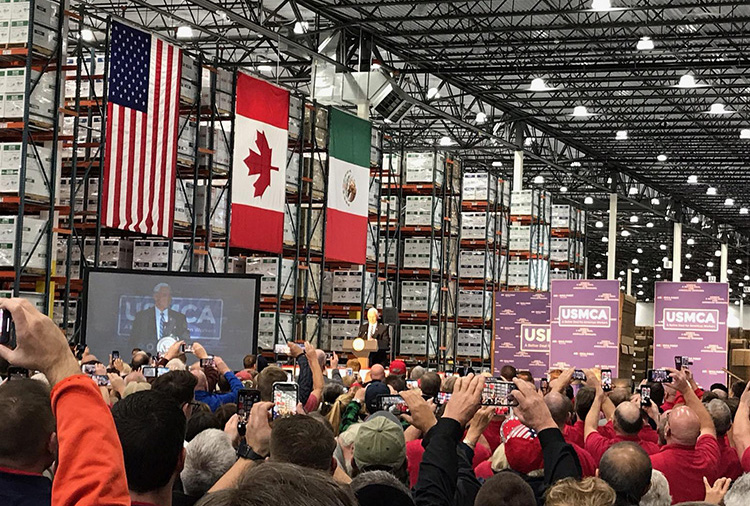 “America needs the USMCA, and we need it this year,” he told the audience at a meeting organized by American First Policies. It was held at Uline, a shipping and business supply company based in Pleasant Prairie, Wis.

Pence spoke of President Donald Trump’s efforts to open up markets across the world. The goal is “free, fair, and reciprocal trade that puts jobs in the city and on the farm first,” he said.

The vice president pointed out that the U.S. unemployment rate is the lowest it has been in half a century, and that disposable income for working families is up $5,000 per year. Still, he said there is work yet to do.

“We have an incredible opportunity before us, because sitting on the desk of the Speaker of the U.S. House of Representatives is the largest trade deal in American history,” he said.

“It’s time for Congress to enact the United States-Mexico-Canada Agreement.”

When talking about trade discussions with our neighboring countries, Pence pointed specifically to dairy, mentioning the Class 7 milk pricing that took place in Canada. “This president stood strong and fought hard for dairy and got a win,” he said.

As for the likelihood of USMCA becoming a reality, Pence said, “We have every confidence that when Speaker Nancy Pelosi puts the UMSCA agreement on the board for Congress, it is going to pass.”

Dairy’s perspective
In a panel discussion held prior to Pence’s arrival, the importance of trade for the dairy industry was again recognized, with one of the speakers being dairy farmer Dave Daniels. He owns Mighty Grand Dairy, a farm with 575 cows and 1,100 acres near Union Grove, Wis.

When asked why an update to the current trade agreement with Canada and Mexico is needed, Daniels said, “We’ve seen technology change since the first NAFTA came through, so we need to upgrade some of the standards.”

Daniels also noted the value of additional markets for all farmers, not just dairy producers. He said, “In agriculture, we produce food. In order for us to make it on our farm, we have to sell that food.”