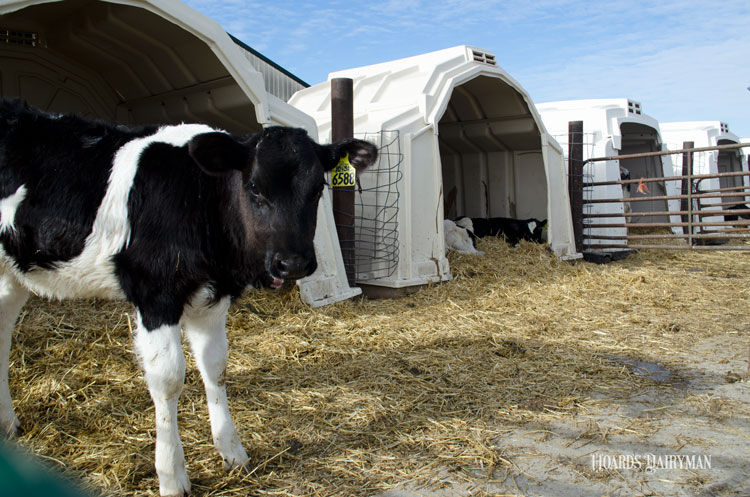 The preweaning period of a calf’s life is not only important for its health and growth down the road, it’s also indicative of its behavior and ability to adapt to new situations. According to research completed at the University of British Columbia and published in the Journal of Dairy Science, calf behaviors early on in life can indicate how quickly they can be weaned.

Calves that were characterized as slow learners eventually weaned at a later age in a system where calves were fed with an automated system and were weaned based on starter intake.

“Calves that required extensive training to learn to use the automated milk feeder and had reduced milk intake in the first week, were termed slow learners,” the researchers explained. “We found that these slower learners weaned at a later age.”

Those calves also lagged behind their counterparts in milk intake, drinking speed, visits to the milk feeder, and growth before weaning.

Calves that were categorized exploratory-active did not have faster development or quicker solid feed intake, but they did have greater weight gains throughout the experiment, which researchers correlated to a behavioral trait of this group to better cope with the weaning transition.

Calves that had high colostrum and first milk intakes were considered strong drinkers, and these young bovines visited the automated feeder less often than other groups through the preweaning period. They also struggled to gain weight when weaned based on starter intake – a factor that made researchers suggest this group might need a more moderate step down approach to weaning from milk.

The final group, low vitality, was made up of calves that took longer to stand up, walk, and suckle the dam after calving. These calves did not have delayed solid feed intakes or weaning, but they did consume less milk preweaning than other calves.

Across the board, the best indicator of calves that would wean early based on starter intake was a very simple factor. If calves started eating solid feed early and were eating a lot of starter, they generally weaned earlier, with the fastest of the group of 48 calves being weaned at 44 days of age.