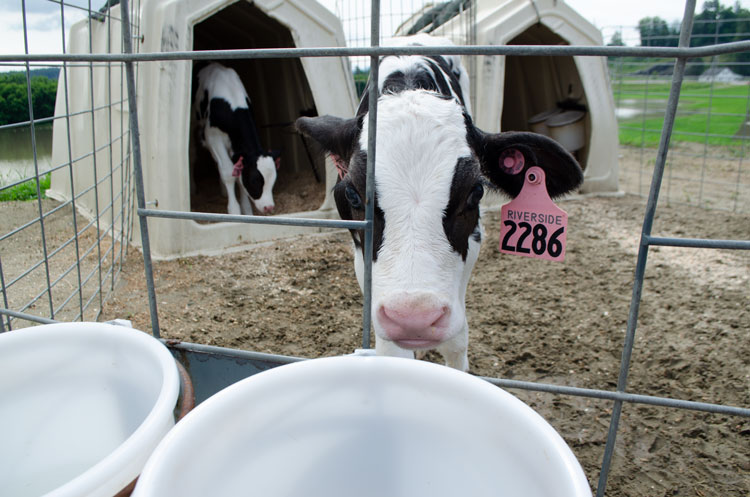 Wagner Farms in Oconto Falls, Wis., had a 0% death loss in their calves last year. For anyone that has worked with animals, this is the ultimate goal, but sometimes incredibly difficult to achieve. How did they do it?

At the recent Purina Leading Dairy Producers Conference, Wagner Farms’ calf manager Laura Raatz shared their six pillars for calf success. “We don’t know everything there is to know about raising calves, but I can tell you what we do,” she began. “There are no silver bullets, but we always stay open to change.”

Raatz’s first pillar is nutrition. They begin at birth with 4 quarts of quality-tested colostrum that must score at least a 22 when tested with a brix refractometer. The farm feeds whole milk, so they have found success with a milk balancer. “The more consistent the solids stay, the happier your calves will be,” Raatz emphasized. They do feed three times per day and wean based on starter intake.

Their second pillar is hygiene and sanitation. Raatz said they’ve always tried to keep things clean, but they took that a step further after fighting Cryptosporidium and salmonella. They clean anything that comes in contact with calves and use a chlorine dioxide sanitizer before next use by the calves.

The farm’s third pillar came about a few years ago when they started exploring paired calf housing. Today, the farm separates the calves with a fence until 4 weeks of age, then removes the fence for a full pair housing system. There, they are allowed maximum milk intake to limit cross-sucking. They have seen improved starter intake and average daily gains in these calves, which Raatz associates with the social benefits of the “buddy system.” She explained that it took several “failed” attempts to find the right way to get the system to work for them.

The fourth pillar Raatz shared was record keeping. Wagner farms records a lot of data related to calves, including weights at various stages. She explained that the records help pinpoint what works for them and what doesn’t. Along with the importance of record keeping is the existence of well-defined protocols.

Raatz’s fifth pillar is reducing stress at weaning. Their philosophy is to allow the calf to experience no more than one to two stressors or changes at a time. They have a 28-day step-down process. They allow calves to eat as much starter as they want, shooting for at least 8 pounds of starter consumed per head per day in the summer and 10 pounds per head per day in winter.

The final pillar for the farm is benchmarking. The benchmarks are based on record keeping and drive management decisions. An example of this at Wagner Farms is average daily gain benchmarking. Since they track weights, they have a benchmark of 1.9 average daily gain during the preweaning period. While their average is much higher than that, any calf that does not reach their goal is culled following weaning.

“One area that gets cut short in tough financial times is calves, we try to look at that differently,” Raatz concluded. “Take a closer look at your calf program and ask yourself, what are you doing for the future of your dairy.”