What is the true cost of mastitis?

Mastitis is one of the few diseases where costs can easily be calculated.

By Peter Edmondson
The author is a vet who runs UdderWise-Global Mastitis Solutions, United Kingdom. To learn more about the author, visit his website at www.udderwise.co.uk.

Mastitis is one of the most common diseases of dairy cows. There are two principle types: clinical and subclinical. Clinical mastitis is when there are obvious changes to the milk and udder. Milk may have clots, appear watery, or be discolored. The udder may appear normal or may be hot and swollen. There is a range of severity with most cases being mild. Toxic cases can occur, especially around calving time.

The costs of clinical mastitis includes:

Discarded milk. The costs associated with discarded milk is easy to calculate . . . add the treatment time to the milk withdrawal period and multiply by the average yield of the cow. For example, a cow giving 40 liters (88 pounds) per day is treated for three days followed by a milk withdrawal period of four days. The total time that milk is discarded is seven days, and so the total amount of milk discarded is 280 liters (40 liters per day x 7 days) or 617 pounds.

Medicines. This will include intramammary antibiotic tubes and other medicines such as NSAIDs, injectable antibiotics, oxytocin, and supportive therapy. NSAIDs have been shown to aid recovery by providing pain relief and speeding up the healing process. Residue testing cost would be added to this if every cow is tested at the end of the milk withdrawal period.

Labor. Any case of mastitis takes time to treat and slows down milking. The cow is milked separately or housed in a hospital group, medicines administered, records completed, milk discarded for the withdrawal period, and milk tested to ensure that it is free from residues before entering the bulk tank. Many farmers will tell you that this adds up to about an hour per case. For the more severe cases, where animals need to be nursed and stripped out frequently, labor input per case is significantly higher.

Veterinary costs. Veterinarians are often used to examine each cow to decide the most appropriate treatment. Cows with toxic mastitis will require far more veterinary input than cows with mild mastitis.

A cow that dies from E coli mastitis at the time of calving will have a 100% loss of production. Yield data shows that after a case of mastitis, milk never returns to the previous production level. A cow at peak yield with mastitis will have a significant reduction in production. Mild cases at the end of lactation can result in a relatively small reduction.

Figure 1 illustrates the reduction in yield in a cow with mastitis that occurred 12 days into lactation, as shown by the arrow. Research has shown that the average production loss is 5% of total lactation yield following any case of clinical mastitis, irrespective of when the clinical case occurred. For example, the average production loss for a 12,000-liter (26,500 pounds) cow with one case of mastitis will be 600 liters (12,000 liters x 5%) or 1,325 pounds.

Culling. A herd with good mastitis management will have to cull few, if any, cows due to problems with recurrent or chronic clinical mastitis. The culling cost will be the difference between the sale and replacement value and to this should be added the difference in yield of the replacement animal.

Death. In severe cases, such as toxic E. coli and gangrenous mastitis, death can occur. The total cost of a death is much greater than the value of the animal that has died. It will also include any treatments, time spent looking after the cow, disposal costs, a loss of genetic potential, and the total loss of production. 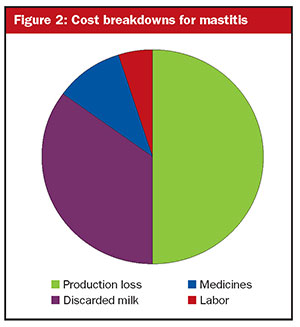 Figure 2 shows the average breakdown of costs of a mild case of clinical mastitis where the cow is not culled. The greatest cost is lost production at 50% followed by the milk discarded at 35%. The costs of medicines are relatively low at 10%.

Herds impacted with subclinical mastitis will have high somatic cell counts. Most milk buyers penalize farmers who are supplying high cell count milk as this has less value. The desirable components in milk are reduced and there can be a shorter shelf life. Most milk buyers start penalizing once the cell count is over 200,000 per mL, with penalties rising as cell count levels climb.

Reduced milk price. The main cost of subclinical mastitis is the reduction in milk price, which is lost profit. An example is a herd with a cell count of 350,000 per mL in the United Kingdom where milk price has been reduced by 8%.

Elevated culling. Chronic, persistent high cell count cows may need to be sold, and the cost of culling has already been described.

Depressed production. There is a reduction in milk yield as subclinical mastitis damages the udder tissue at levels over 200,000 per mL. On average, there is a 2.5% production loss for every uptick in cell count of 100,000 above the 200,000 cells per mL threshold.

Intensified treatments during lactation. Some causes of a high somatic cell count, such as Staph aureus, can also cause clinical mastitis that requires treatment. Some high cell count cows may be treated during lactation, and the treatment costs will be medicines, discarded milk, and time to treat the animals.

It’s all in the flow
By Peter Edmondson

Milk Quality
The 15 key steps to avoid residues in milk