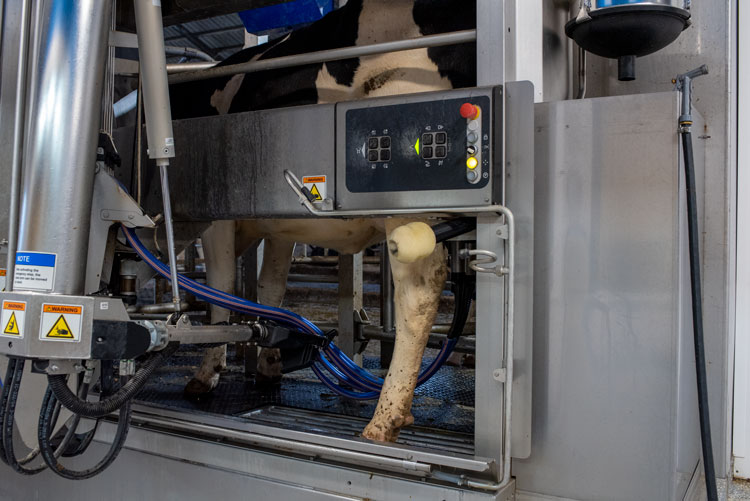 The number of daily visits a cow makes to an automated milking system has a notable impact on overall milk production. The value of frequent milkings starts right after calving.

“Sometimes our heifers really struggle with early lactation visits,” he said. He shared a dataset where older cows were averaging more than three visits to the robot per day by the second week of lactation. Meanwhile, first-calf heifers were averaging just two visits per day, which means some of those young cows were being milked fewer than two times per day.

“It’s really a problem when cows that haven’t even reached their peak yet aren’t milking twice per day,” Salfer said.

Of course, the basics of good robot barn management have an influence on the number of visits per day. In his presentation, Salfer pointed out that well-formulated rations, properly designed barns, the correct employees, and the right kind of cow all play into milking frequency and robot success.

He also spent some time talking about training heifers to use the robot. He presented data from one farm that started walking heifers through the robots prior to calving. Before they did the trainings, first-calf heifers were visiting the robots twice a day during the third week of their lactation. After training began, by the third week of lactation, heifers were averaging almost three milkings per day. That trend persisted all the way through 210 days in milk.

“If we can get these heifers trained and used to the robot, they will adjust pretty rapidly,” he said.

To train heifers, Salfer said to walk them around the whole pen as you bring them up to the robot. “Be a little stealthy about it,” he explained. “Guide is a better word to use than chase or even fetch for heifers.” He said that what you want to do is develop a habit, not a chronic fetch cow, and he recommended training heifers at least three times per day.

“Practice the behavior you want in early lactation,” he said. He reiterated that more visits early equate to more visits in late lactation, which equates to more milk overall.

To hear Salfer’s full presentation, watch the archived webinar “Feeding and management in robotic milking systems” on our website. This webinar was sponsored by DeLaval.