COULD DAIRY’S “V-SHAPED” RECOVERY transcend into a “W-shaped” price swoon? If shifted from a “V” to a “W-shaped” graph, the markets would face a second price downturn fueled by oversupply of milk, lighter dairy product demand, or a combination of both market metrics.

“WE ARE NOT OUT OF THE WOODS on that yet as one looks to the fall and potential milk prices next year,” stated NMPF CEO Jim Mulhern. “The last thing we need is a big increase in milk production.”

JULY POSTED THE LARGEST GAINS in U.S. milk production since the pandemic erupted in the United States. Milk for the month rose 1.5%, the highest since March when year-over-year milk climbed 3%.

CLASS IV BUTTER-POWDER CONTRACTS have traded far closer to world price levels with a $14 net for the final four months of the year and a $15.20 average for January-to-June futures on the CME.

“POST-LOCKDOWN DAIRY DEMAND is both fantastic and terrible,” said StoneXGroup’s Nate Donnay. “Retail sales of natural cheese are running strong . . . still up 12% to 13% from last year through the first half of August. Meanwhile, food service sales are still down 15% to 20%.”

“IF YOU NARROW THE DATA to just commercial domestic purchases, removing exports and government purchases, then the demand numbers look pretty terrible, down 3.5% from last year in June,” said Donnay. 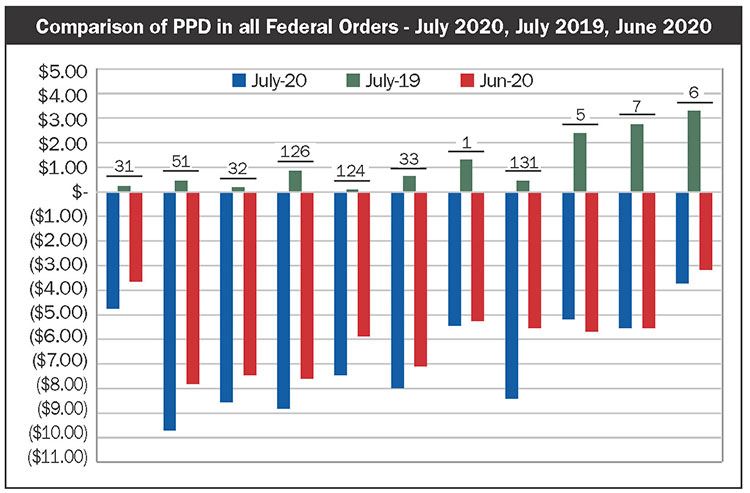