Does income or structure deserve our attention?

By Richard Levins
The author is a professor emeritus of applied economics at the University of Minnesota, St. Paul.

There are two ways to look at the problem facing family dairy farms. The first is that of a “farm income problem.” The second is that of a “farm structure problem.” It is common to think that programs that fix the first problem will also fix the second. A July 2020 USDA report, “Consolidation in U.S. Dairy Farming,” gives us good reason to think the situation isn’t that simple. 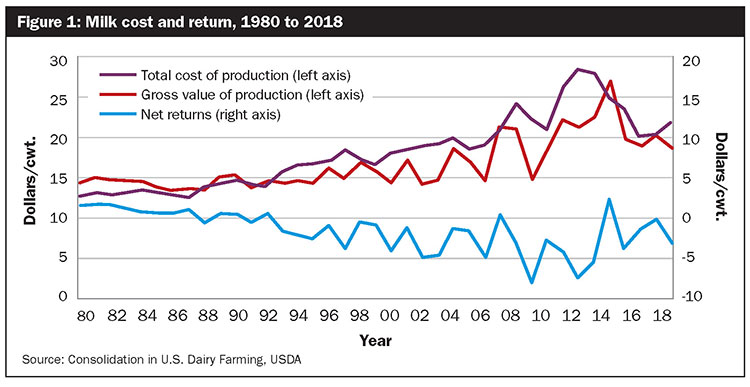 The two figures from USDA’s July 2020 report convey a great deal of information. Figure 1 is a picture of the farm income problem. It shows that, on average, there have been many years in which net returns for producing milk have been negative. No surprise there. 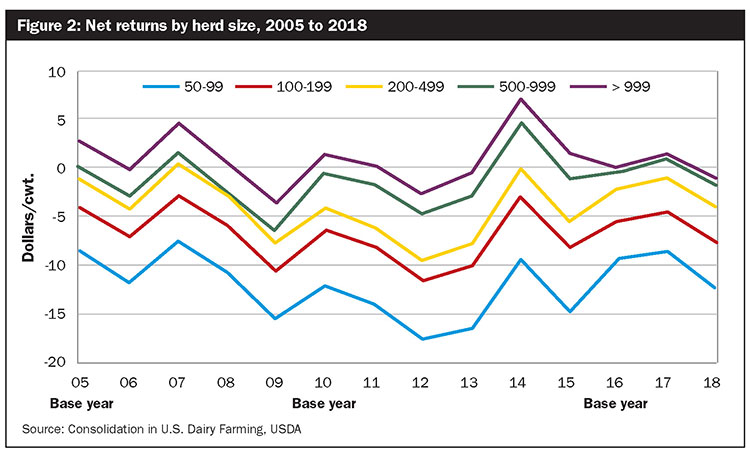 Figure 2 illustrates the disparity hidden by the average numbers in Figure 1. It’s an equally important story. When it comes to net returns, larger farms have higher income per hundredweight (cwt.) than do smaller farms. This is the basic story of today’s dairy farm structure problem.

When looking at these two charts, the dairy industry has both problems — farm income and farm structure. However, the attention given to the income problem overshadows the structure problem.

A fresh look at the structure problem

The USDA report, authored by James MacDonald, Jonathan Law, and Roberto Mosheim, says a lot in this single sentence: “This report focuses on the long-term structural shift toward larger dairy farms.” The keyword is “structure” and not “income.”

Structure refers to both farm numbers and size. We might have a “structure” of many smaller farms, all of them pretty much alike. Or, we might have some smaller farms and some very large farms, with the two groups being very different from each other in important ways.

The report gives plenty of numbers to document what we all know . . . dairy farm numbers are in free fall. As this happens, huge farms are replacing the smaller ones that are leaving the business. Cow numbers stay rather constant but milk production continues to grow by leaps and bounds. Looking ahead, consolidation will likely continue.

Now comes the big takeaway as far as policy is concerned. Differences in production costs, and not milk prices, are driving this structural shift: “The cost advantages held by larger dairy operations persist over time. USDA’s Economic Research Service (ERS) reports baseline estimates for milk costs and returns for 2000, 2005, 2010, and 2016, and in each of those years larger operations realize lower costs than smaller operations. The differences are consistently substantial and provide the powerful economic incentives driving dairy consolidation.”

Because of cost differences among dairies of different sizes, “The disappearance of smaller dairy farms — particularly those with fewer than 200 cows — is likely to continue in years to come,” stated the authors.

What would we do if we saw our problems in the light of structure instead of income?

For starters, we would step away from “one-size-fits-all” programs that are most often applied to the farm income problem. Such programs generally involve direct payments, enhancing domestic and international demand, or managing supply. Instead, we would build programs that benefit smaller farmers more than very large farms. This is the only way to address the difference in production costs between farmers on the smaller end of the scale and those on the larger end.

There has been the occasional half-hearted nod to this approach over the years. In grain programs, we sometimes see payment limitations. For the most part, these payment limitations have been largely ineffective for grain farmers. In dairy, recent policies like Dairy Margin Coverage (DMC) provide benefits tilted toward smaller farms.

While this is a step in the right direction, the USDA report’s assessment of those programs is hardly encouraging: “The added support provided in recent years — while substantial in the aggregate — remains a fraction of the average cost differences between small and large operations.”

I know many thoughtful people who admit that we have structural change but deny that it is a problem. Instead, it is the natural working of a get-big-or-get-out system that replaces higher-cost producers with lower-cost producers.

Others see structural change as a real problem that needs special policy attention. As we lose smaller farms, we lose support for rural economies and farming systems that are better for the environment.

Which side are you on?

If you side with those who see the loss of smaller family dairy farms as a problem, it’s time to start thinking about realistic policies that will stabilize farm structure. We’ll save a discussion of what those policies might look like for another time. For now, let’s just say that those policies will have to be different from traditional approaches that address farm income problems.

My cows’ teats are cleaner than your hands
By Richard Levins 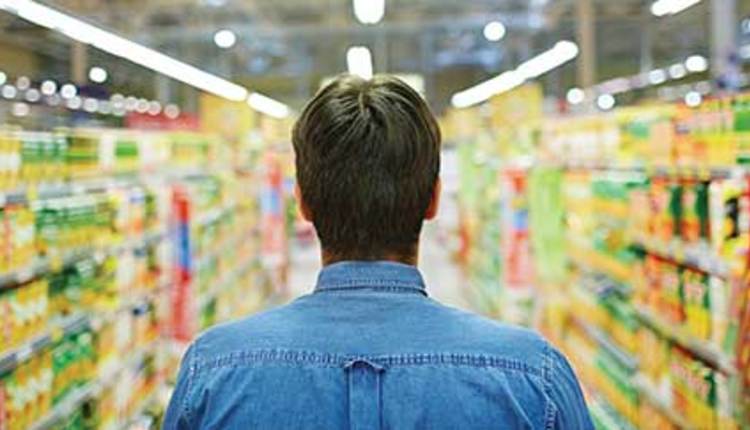 Features
Corporate concentration affects us all
comments powered by Disqus