As calls for federal order revisions continue to mount, it’s important for all of us to recognize that these provisions perform a critical role in pricing milk across the country. That function has become more vital than ever because the amount of milk marketed by the 11 federal orders stands at an all-time high. This situation unfolded even though the number of federal orders hover one away from a modern-day low.

Federal Milk Marketing Orders (FMMOs) were first enacted in the 1930s to assist in the orderly marketing of milk, establish minimum prices, and in some ways, level the playing field by returning some market power to dairy farmers. Despite being rolled out as a national program, FMMOs initially handled only 25% of total U.S. milk output and accounted for just 41% of all Class I beverage sales a few decades after implementation.

As shown in the graph below, it took nearly 30 years for federal orders to approach the 50% threshold of the nation’s milk supply. Coincidentally, that’s the same decade market orders peaked at 80. 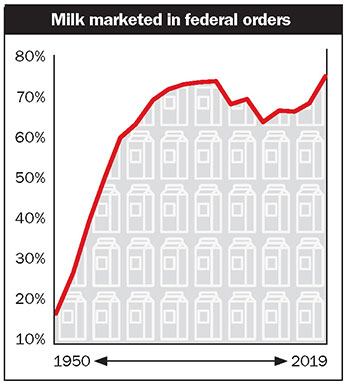 As transportation improved, the number of FMMOs slowly consolidated, but their impact continued to grow by marketing more and more milk. When the last round of major federal order reform was fully implemented in 2000, the remaining 11 orders accounted for nearly 70% of the U.S. milk supply. From there, the share of milk slid to 65% when dairy farmers, largely in Idaho and Utah, terminated the Western order in 2004. But California’s recent entry into the system sent milk volumes up to a record 72% of U.S. milk output.

While few among us are calling for an outright elimination of federal orders, some reforms are definitely in need. As that debate ensues, federal orders’ major role in marketing milk must remain top of mind despite some shortcomings.

It is time to control bovine leukemia virus
Animal Care
Related to:
features, editorial
In Features